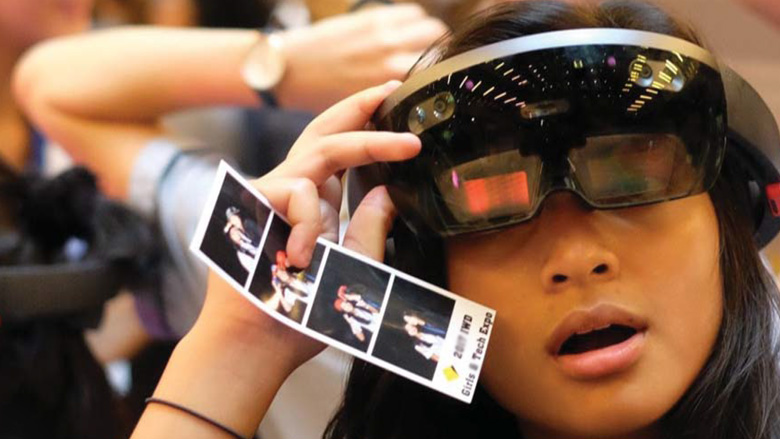 The workforce of the future will call for more experts in science and tech than ever before. The Girls in Tech Expo inspires students to join the charge.

More than 300 students attended this year’s event as part of International Women’s Day celebrations. Held at Commonwealth Bank Place in Sydney, the expo showcased virtual reality, the latest in cyber security and big data, far-reaching drone technology, and an array of robots – including our very own Chip CANdroid.

“The expo is designed to get girls from high school to come into the bank to have a look at all the cool technology and see what fun it is,” says one of the event’s organisers Sharon Collins, Head of Future Talent Community and Inclusion in Enterprise Services at Commonwealth Bank.

“There’s a lot of opportunity to find careers in STEM and there’s a lot of tech jobs out there for the future, so we need more girls to study those disciplines.”

Students delved into VR with the help of the Innovation Lab team, and experienced the HoloLens holographic computer by Microsoft, who also had engineers at the ready to chat with students about what it’s like to work in tech.

At the Telstra stand, students could take control of a drone that was thousands of kilometres away, and have robots MeeBot and Alpha 1 Pro do their bidding.

Cyber security experts were on hand to talk about careers in their field, the crew from Tableau brought big data to life, and the ThinkUKnow team showed students how to spot online scams, create strong passwords, and stay safe online.

“I think it’s wonderful to get the schools involved,” says Bossley Park High School teacher Diane Samulski. “It’s very good for them to understand what’s ahead of them.”

One of the aims of the Girls in Tech Expo is to address the gender gap in STEM, as well as the broader ever-growing need for expertise in these fields.

“There’s an explosion of demand for people with STEM skills and the opportunity is now,” says Karen Taylor-Brown, Refraction Media CEO and Publisher of Careers with STEM magazine, who also had a stand at the event. “75 per cent of future jobs are going to require STEM skills.

“The world’s facing a lot of challenges and we need all hands on deck to solve these – but also to have diverse teams approach these problems in a collaborative, open way,” Karen explains.

“We sent a box of 100 magazines to every single Australian secondary school – that’s 300,000 magazines across the country at no cost to the schools. This helped career advisors and educators talk about what the careers of the future are going to be,” Karen says.

“Girls need to know that anything’s possible,” adds Colleen McKenna, teacher at Blacktown Girls High School. “Events like this broaden their minds as to what’s available.”