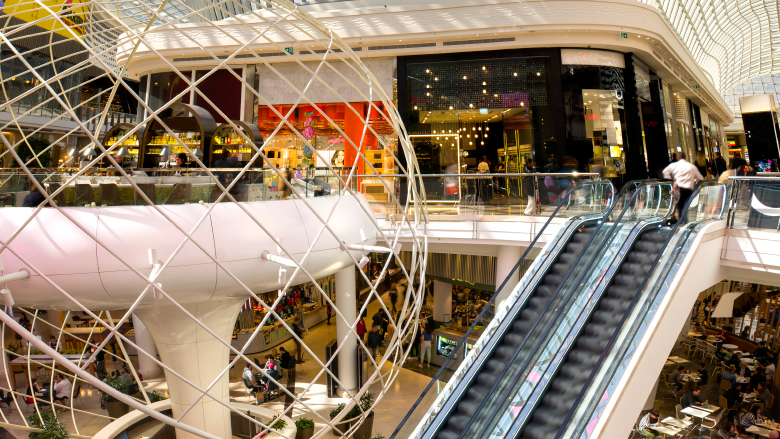 Online purchasing by Australia’s oldest generation, the Pre-boomers, is set to grow faster than all other age groups in the year ahead, according to new research from the Commonwealth Bank.

Online purchasing by Australia’s oldest generation, the Pre-boomers, is set to grow faster than all other age groups in the year ahead, according to new research from the Commonwealth Bank.

Pre-boomers (over 70 years) have indicated they will increase their online purchasing by 18 per cent over the next 12 months. Baby boomers (51 to 70 years) are also expecting double digit growth (10 per cent).  In contrast, Gen Y (22 to 35 years) anticipates a five per cent increase, the lowest growth rate of the generations.

While Australian retailers and shoppers agree that 25 per cent of all purchases are currently made online, retailers are predicting a 24 per cent increase in online sales over the next 12 months, compared to shoppers forecasting a mere 9 per cent rise in online shopping. 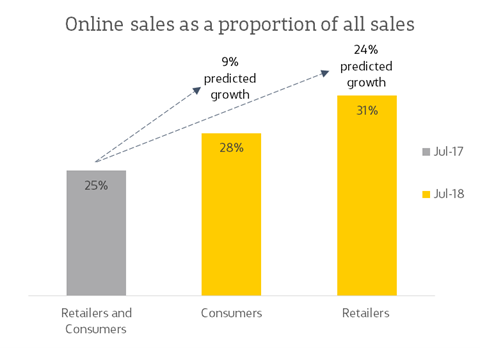 Jerry Macey, National Manager Retail, Commonwealth Bank said, “The older generations will be a strong driver of online sales growth in the coming year, with purchases from Pre-boomers expected to grow at twice the rate of the average Australian shopper, albeit from a low base. Collectively, shoppers are also saying online sales overall could fall significantly short of retailers’ expectations.”

Despite retailers and consumers agreeing that some level of online sales growth will occur, the vast majority of shoppers still prefer to make purchases in-store (59 per cent) rather than online (16 per cent). A quarter of shoppers indicated no preference. 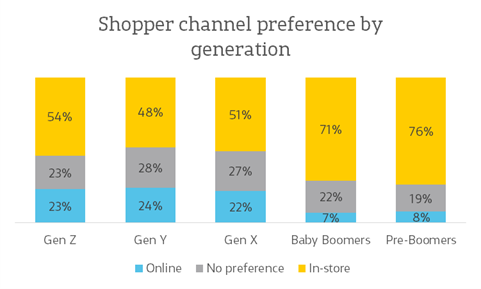 “While online sales are tipped to grow, most shoppers still prefer to buy in-store. Contrary to popular belief, Gen Z is indicating a strong preference for shopping in-store, more so than the two generations that immediately precede them,” Mr Macey said.

When deciding to make a purchase, a large number (44 per cent) of people research in-store before completing the purchase online. Twenty-five per cent of shoppers admit to engaging in ‘showrooming’ most of the time when purchasing a product. Shoppers said they were most likely to regularly showroom when purchasing recreation and leisure goods (43 per cent) and household appliances (41 per cent).

“Shoppers still want to touch and feel items before they buy, look for better prices online or just aren’t ready to purchase on the spot. Shrewd multichannel retailers are capitalising on this trend by ensuring a seamless experience for customers shopping both in-store and online,” Mr Macey said.

When shoppers that engage in ‘showrooming’ were asked what would trigger an in-store purchase, a large majority (59 per cent) cited consistency in pricing across in-store and online. However, only 25 per cent of retailers are actively price matching across channels to increase in-store conversion rates.

Twenty-six per cent of shoppers also indicated a greater likelihood of purchasing in-store if there was better technology available to compare products, stock levels and prices, whereas only 12 per cent of retailers are investing in this area.

Retailers are recognising the importance of customer service with almost half (49 per cent) investing in improving customer service skills and product knowledge among their staff. This is in-step with shoppers’ needs, with over a third (34 per cent) stating better quality and more knowledgeable staff can trigger a purchase.

“Good quality service and product knowledge remains paramount for retailers, with many already investing to satisfy shoppers across all generations,” Mr Macey added.

The CommBank Retail Insights Report is an exclusive wide-ranging analysis, providing unique insights into the current trends and developments impacting the Australian retail industry. The report is now in its fifth edition, which researches generational attitudes to spending and compares retailers’ strategies with consumer demand. The research is based on quantitative surveys of two cohorts: (i) key decision makers from 506 small, medium and large Australian retail businesses and (ii) 1,531 Australian consumers with the data segmented across the generational groups.