Exhibiting values of respect and equality

The Museum of Australian Democracy (MoAD) at Old Parliament House in Canberra recently opened an exciting new exhibition, Changemakers, which celebrates the women who have played a pivotal role in shaping Australian society.

This exhibition honours the achievements of trailblazers from many walks of life, including Edna Ryan’s campaign for equal pay in 1974 to Rosie Batty’s anti-domestic violence campaign as Australian of the Year in 2015, and Nyadol Nyuon’s advocacy for refugee women today. Changemakers asks its audience to consider how the national conversation and the future of Australia has been changed by the work of female politicians, artists, activists, athletes and women in business.

The launch of Changemakers was hosted by journalist Annabel Crabb. Former Governor-General Dame Quentin Bryce delivered a keynote speech, and a panel of some of the women featured in the exhibition participated in a discussion exploring the question: ‘what does it mean to have a seat at the table?’

CommBank sponsored Changemakers as part of CommBank Next Chapter – a program to help victim-survivors of domestic violence and financial abuse achieve long-term independence. Improving gender equality and respect is key to ending domestic violence and financial abuse, and sponsoring Changemakers is one way the Bank can help raise awareness of the importance of fostering an inclusive and respectful society.

Speaking at the event, CommBank’s Executive Manager Community Investment Claire Dawson said: “It has been well-established that disrespect and gender inequality are drivers of violence and abuse, and by supporting Changemakers, we get to celebrate the people who have championed gender equality and who continue to make Australia a better place for everyone.

“Employers and the workplace can play a major role in improving gender equality and addressing the disrespectful attitudes and behaviours that lead to abuse. Business can be a changemaker on the issue of domestic violence and I implore everyone to consider what more your workplace, your business, your sector could do. It’s time for more businesses to step up.”

Featuring as part of the exhibition is a paperweight that once belonged to former CommBank employee, Florence Manton. Ms Manton was the first woman appointed to the bank’s staff in Sydney on 9 September 1912. She was with the bank for ten years serving as Head Typiste and Secretary to bank’s first Governor Denison Miller during her tenure.

The paperweight is made of a piece of marble and was used in the bank’s Head Office in Pitt Street, Sydney. 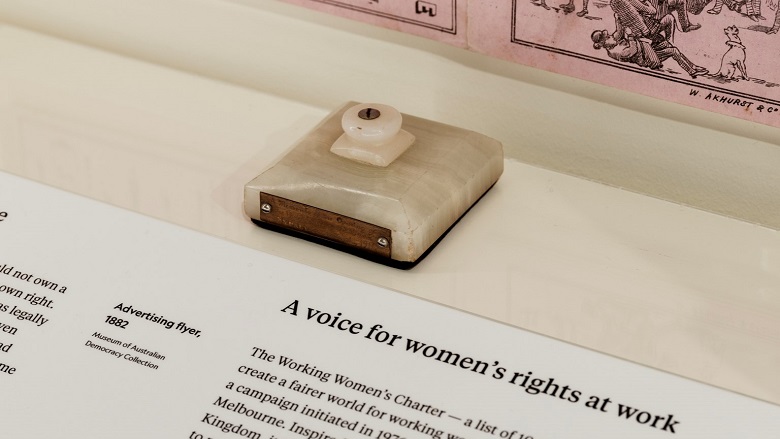 During her time at the bank, in addition to her role, Ms Manton established several initiatives to support the bank’s employees through the World War 1 effort.

From 1919-20 she had the distinction of temporarily serving on the staff of the Governor-General who in those days had offices at 120 Pitt Street, CommBank’s head office.

During World War 1 she wrote to the serving members of CommBank staff who had enlisted and gone abroad. Demand for the letters grew so great that the Governor decided that it should become part of a small magazine to be produced by Advertising Department for distribution to all members of the staff. The first issue appeared in December 1918—it was called "Bank Notes" and continued until August 1991.

She was also a founding member of the Patriotic Club, which helped to stock a stall called ‘The Gunyah’ that was set up by female employees in Martin Place to sell goods and raise money for the war effort. The Patriotic Club continued past the war and has since evolved into the CommBank Foundation. The CommBank Foundation, still in existence today, has been supporting community and charity organisations across Australia for more than a century thanks to the generosity of its employees.

“As one of the bank’s first female changemakers, it’s an honour for us to loan Ms Manton’s paperweight to the exhibition and have it sit among all the other memorabilia from such impressive gender equality pioneers.

“We hope the exhibition will spark conversation and inspire those who visit, as we all continue to work towards establishing a culture of respect and equality, so we can help prevent domestic violence and financial abuse,” concluded Ms Dawson.

The exhibition is now open at the Museum of Australian Democracy, located in the National Heritage listed Old Parliament House and entry is free. For more information visit the MoAD website.