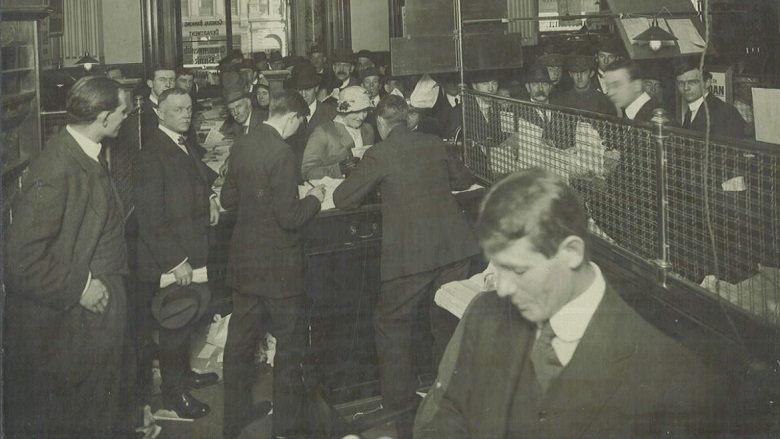 World War One changed the economic and social fabric of Australia in a most profound way.

For all the devastating loss of life and the destruction wrought across Europe and the other parts of the globe, World War One changed the economic and social fabric of Australia in a most profound way, the impact and ramifications of which are still being felt today.

The huge expansion in mining and manufacturing, the tilt to Asia, the creation of the modern welfare system, the establishment of the federal government’s tax-raising powers and a subsequent push to encourage greater immigration – all of these developments came about as a direct result of the conflict, says Commonwealth Bank Chief Economist Michael Blythe.

After a slump in trade between 1914 and 1915, exports soared as the war effort picked up with domestic manufacturers gaining from the drop in imports which didn’t recover until the end of the war. Key industries such as steel, chemicals and mining were among the major beneficiaries.

Iron ore production rose 150 per cent, crude steel output by 1,200 per cent and the value of chemical production increased by 88 per cent. In terms of geographical markets, Britain and its empire still held sway as to Australia’s exports, but the gradual switch to Asia was underway by war’s end, the region accounting for 19 per cent of exports compared with 10 per cent prior to 1914. 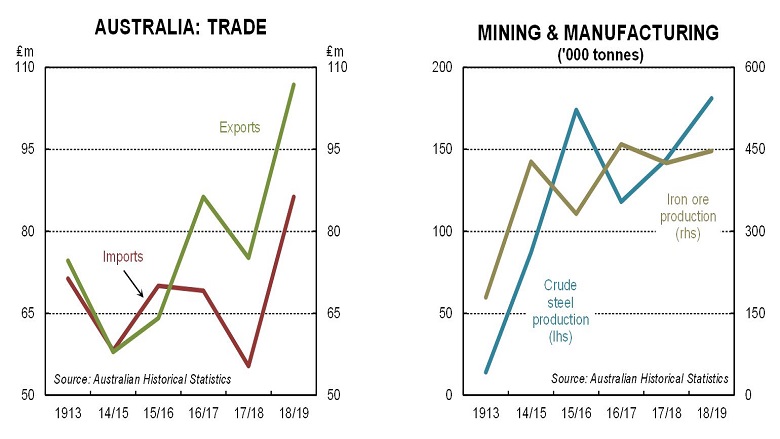 The changes weren’t just restricted to those macro-economic effects. The long history of successive governments’ encouragement of home ownership dates back to the building of a country “fit for heroes” through the War Services Homes Scheme in 1918, while the technological innovations of the aircraft industry helped Qantas become the nation’s commercial airline.

The need to raise money to pay for the war effort and fund development afterwards also gave rise to the eventual founding of the Reserve Bank of Australia through the central bank powers granted to the Commonwealth Bank, which administered the 10 war loan and peace bonds. In doing so, this was a significant step forward in the formation of Australian capital markets, says Blythe.

Created in 1959, the RBA evolved out of the Commonwealth Bank, taking on the duties of monetary and banking activities such as the setting of official interest rates and exchange rate controls.

“The RBA’s success in promoting financial stability and economic activity is now a key underpinning of our economic wellbeing,” Blythe writes in an economic research note “The Great War & the economy” released to commemorate the 100th anniversary of the end of the conflict.

“The Government also paid for the war in other ways, the ramifications of which are with us today. The state governments raised most of the revenue prior to the war, including income tax. Federal revenues were mainly from custom and excise duties.

“But a number of new taxes were in place by the end of the war. These included a Federal income tax first levied in 1915/16 and a major revenue source today. The increasing reliance on income taxes and increasing centralisation dates from that time. The debate about how to share that revenue and the need to reform the taxation system continues today.”

Another highly significant move in fiscal policy was the proportion of public debt to Gross Domestic Product (GDP): it rose from 73 per cent of GDP in 1913 to 123 per cent by 1918, making current budget deficits and debt burdens “look modest by comparison” says Blythe. 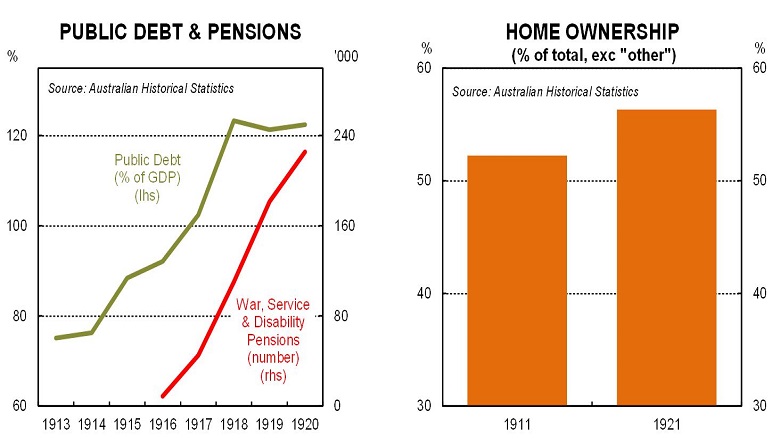 But it wasn’t just the financial aspects of the economy that changed course as a consequence of the conflict. Social welfare experienced a “very necessary and deserved lift” in government spending, increasing by a factor of 23 in the 10 years from 1916 to cover the cost of war, service and disability pensions. “The development of the modern welfare system was underway,” he adds.