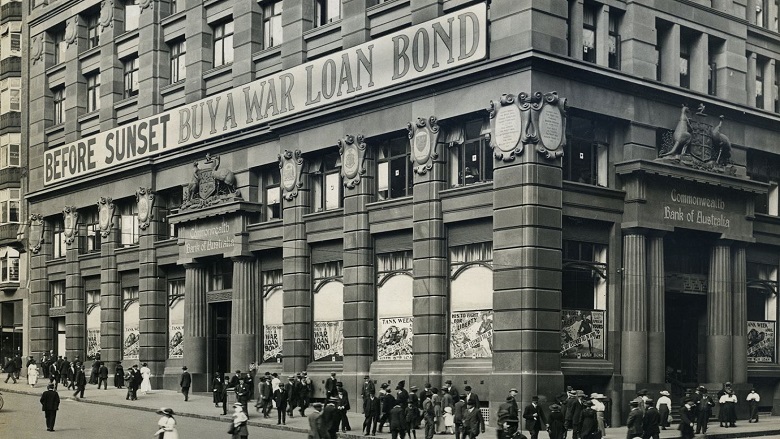 As World War One ground on, often with no end in sight and with appalling loss of life and wounded, the financial costs also grew.

Early estimates had, unsurprisingly, proven woefully inaccurate, just like the predictions that the conflict would be over quickly.

Australia had entered the war with a public debt of £333 million, of which £230 million had been raised on the London financial markets. Given the competing needs of the British Government to fund its war effort, it became abundantly clear, and very quickly too, that the London markets would be severely constrained.

Prime Minister Andrew Fisher, whose second government established the Commonwealth Bank in 1911, had secured the agreement of the state-owned bank and the private trading banks in 1915 to raise £20 million towards the then-estimated £40 million cost of the war. The other £20 million would be covered by a loan from the British Government.

The only problem with the deal was that the Australian Government had never raised such a loan before in Australia. No public debt-raising market existed and nobody knew whether such a large sum of money could be sourced in that manner. 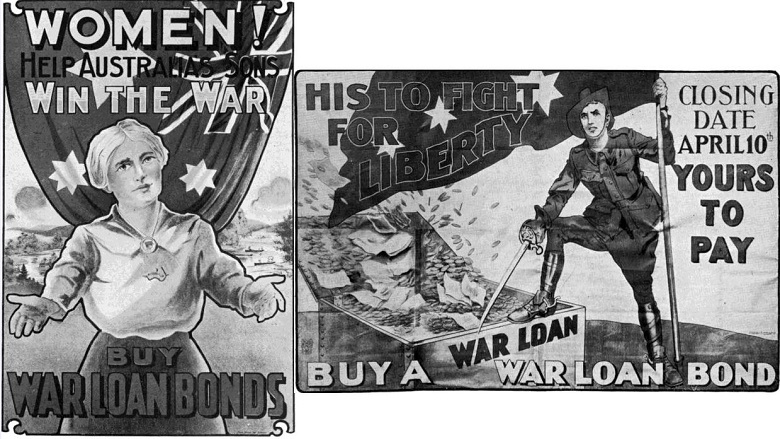 As the government bank, and with Governor Denison Miller keen to show what his fledgling but growing institution could do, the CBA took the lead in organising and managing all of the loans. Miller established a Central War Loan Committee with local committees below it. Membership of the committees included Bank managers, businessmen and community leaders.

He also appointed a team of honorary organisers and publicity men to run a marketing campaign that would have otherwise taken many years to get off the ground and grow to a desired level. The Bank oversaw the successful launch of 10 bonds that raised £250 million in total between 1915 and 1921.

A new form of financing

One benefit of establishing a new form of financing helped save the government a huge amount of money, cash which would have otherwise been diverted from the war effort. Raising £250 million on the commercial markets in London would have incurred costs of around £5 million. The Bank kept its costs below £705,000.

The fund-raising efforts prompted a huge amount of work for a staff already stretched by enlistments and the increasing day-to-day tasks required to keep the country going financially.

Bernice Pitcher, one of the women who joined CBA in 1916 to cover for the male clerks who had gone off to fight, described the pressure to process the paperwork associated with the bonds.

“When war loans were being issued at short intervals, we worked night after night till 10 o’clock for months, and many of the men much later,” she told the Currency staff magazine’s August 1954 issue. “If the Savings Bank was working too, the dining room was opened and we were served a meal for sixpence.”

Such was the support from Australia’s 5 million population to help out where they could on the Home Front that large crowds gathered to buy war loan subscriptions and war savings certificates when each bond raising issue went on offer. 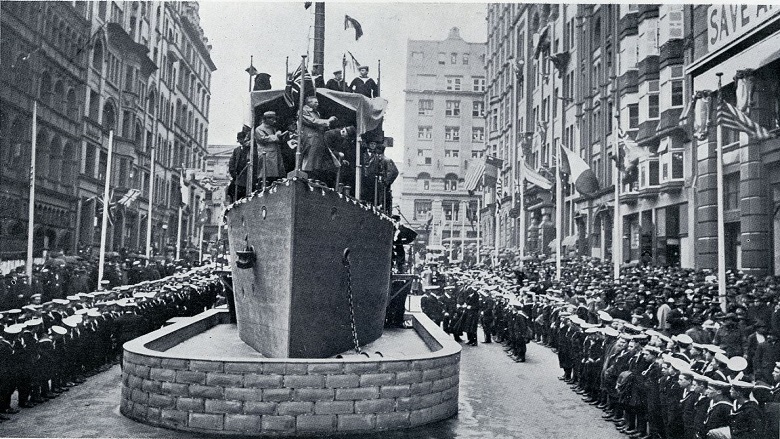 Military equipment and mock-ups of “modern technology” such as tanks first seen on the battlefields of the Western Front in 1916, were used at public meetings to draw crowds and underscore what the money would be used for.

By far the most impressive was the construction of a replica Navy destroyer displayed outside the Bank’s recently opened and imposing head office in Moore Street (later renamed Martin Place) Sydney, to launch the Seventh War Loan campaign in September 1918.

Hundreds of people including Army and Naval units attended under a large sign erected across the front of the “Moneybox” building which read: “Save and serve - buy a war loan bond.” 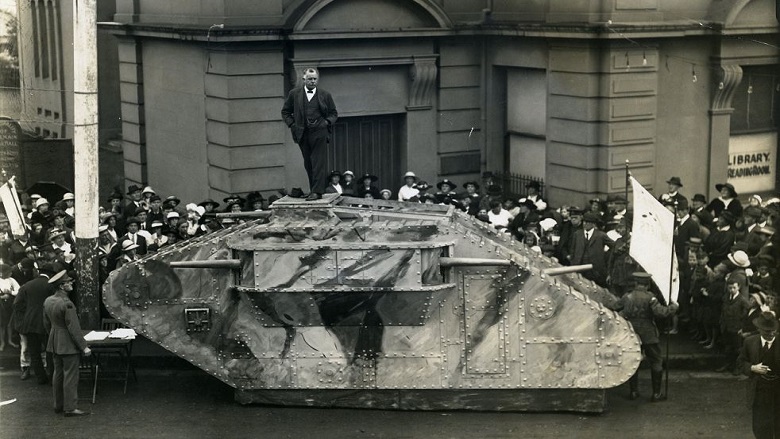 The arrival of “the peace” saw no let-up in the immediate financial pressures facing the government and a further three loans were raised, the last of which was named the “Diggers Loan” with the proceeds used to cover repatriation costs, including the building of homes for returned soldiers.

By the time of the signing of the Treaty of Versailles in July 1919 that officially brought the hostilities in Europe to an end, the Bank had been operating for just seven years.

In that short period it had firmly established itself as the government’s banker - helped by its relatively unique position among its privately owned rivals as both a savings and trading bank - and as the Commonwealth’s agent in virtually all of its financial dealings. It had also become the banker to many of the states.

This was some achievement, as Denison Miller was later to recall. “When the Bank first started, we started in a very small way and then the War came on. We were faced with the position [of] having to step into the breach and to practically control the finances of Australia which we did.”