While the latest data indicates that the recent lockdowns and border closures are clearly slowing the pace of spending, there was solid improvement in the majority of Household Spending Intention categories in July.

The latest monthly Commonwealth Bank Household Spending Intentions (HSI) series highlights how Aussie households are continuing to change their spending behaviours in response to the rapidly evolving environment due to the coronavirus pandemic.

CBA Chief Economist Stephen Halmarick said: “Prior to the imposition of the stage four restrictions in greater Melbourne, the Commonwealth Bank HSI series data to end of July 2020, showed solid improvement in the majority of spending categories.”

“Home buying and retail sales continued their strong run in July, while travel, entertainment and education spending intentions all continued to bounce off their lows of recent months,” said Mr Halmarick.

Home buying intentions in July were almost back to the highs seen in late 2019 due to a combination of both an increase in home loan applications and Google searches. “However the tighter restrictions imposed in Victoria, border closures, and the anticipated drop in the population growth rate are a clear source of downside risk to home buying,” Mr Halmarick said.

The improvement in retail spending intentions in July was driven by increased spending on food, general retail (including department and discount stores) and household furniture and equipment, especially online.

“Although the introduction of stage three restrictions in Melbourne and Mitchell Shire in early July were not enough to stall further improvement in home buying, retail, travel, entertainment and education spending intentions in July, household spending has significantly weakened in Victoria since the stage four restrictions were imposed on 2 August.

“The latest CBA credit and debit card spending research for week ending Friday 14 August shows a decline in the pace of spending. When compared to a year ago, we can see spending last week was up 4 per cent, whereas it was up 8 per cent the previous week and up 12 per cent at its peak in early July. The slowdown in the pace of spending is being led, not surprisingly, by Victoria.”

Each month, analysis by CBA’s Global Economic and Markets Research team provides an early indication of spending trends across seven key household sectors in Australia. In addition to home buying, the series covers around 55 per cent of Australia’s total consumer spend across;  retail, travel, education, entertainment, motor vehicles, and health and fitness. 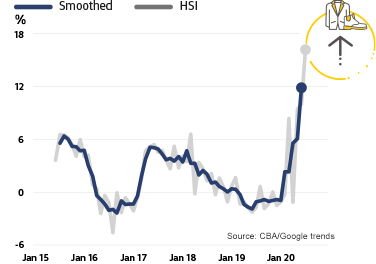 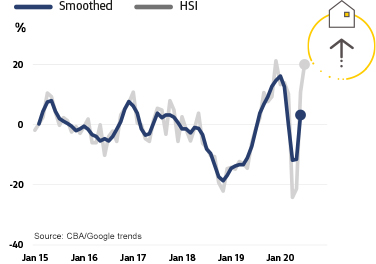 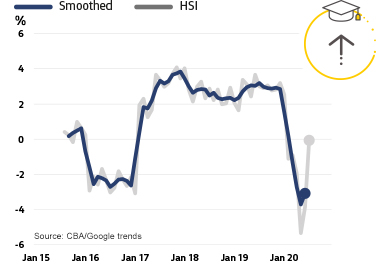 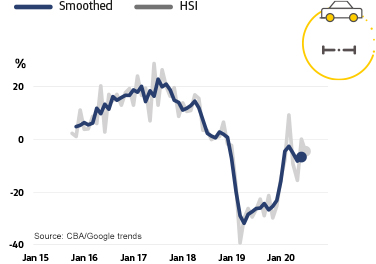 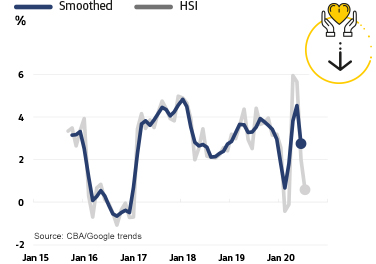