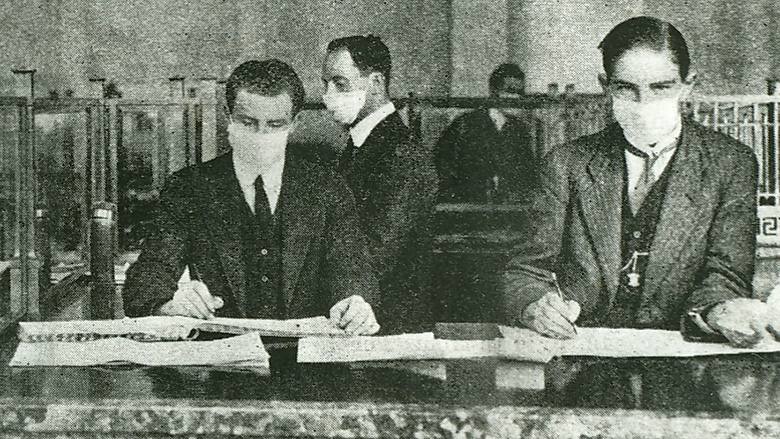 A Tale of Two Pandemics: The Spanish Flu 1919-1920 - economic impacts and recovery

Exactly 100 years ago, another pandemic - the Spanish flu - brought the country to its knees. Despite the passing of time, economically and socially, the stories of then and now are somewhat similar.

This was Australia during the Spanish Flu pandemic of 1919-1920.

As James Bishop, a member of the Reserve Bank’s economic research department, noted in a timely report for the RBA’s monthly bulletin of June 2020, the travel bans, quarantine and social distancing rules 100 years ago were virtually the same to those employed today.

They also had similar effects on the economy, albeit one that was still reeling from the impact of World War One.

But, there were also marked differences from state to state and region to region, particularly given a nation that was so much more dependent on the agricultural and manufacturing sectors for employment.

At the start of the 1920s, those two industries accounted for 50 per cent of all jobs in Australia. Today that number is less than 10 per cent.

These factors combined with a lack of detailed economic data make it difficult to draw too many meaningful comparisons with the 2020 pandemic, says Bishop.

When the Spanish flu arrived in 1919, Australia was a country and an economy in transition. The federal and state governments had pumped hundreds of millions of Australian pounds into the war effort through public expenditure stimulus that was only just beginning to be withdrawn at WW1’s end. Private sector investment had yet to pick up the slack when the pandemic hit.

Nonetheless, information collected from union surveys state that an inability to work due to sickness – the flu – saw the jobless figure rise by three percentage points to over 8 per cent.

Within that figure, lack of available work - actual unemployment - hovered in a band between 4 per cent and 5 per cent from mid-1917 to the end of 1920 before rising sharply later on.

Short-term increases in unemployment were experienced in heavily-unionised sectors, such as building and metal trades, but with significant less data available, an accurate nationwide picture is hard to come by. For example, the most detailed labour survey at the time didn’t take into account the agricultural industry, unskilled casual workers and the self-employed.

A similar paucity of data makes it hard to assess the impact of the pandemic on gross domestic product (GDP), the measure used to determine the level of economic growth.

According to the RBA’s Bishop, that suggested a “V” shape recovery occurred after the Spanish Flu outbreak. This would have no doubt been a welcome outcome for the population of 5.4 million Australians compared to today’s alphabetical discourse of “L”, “W”, “U” and “V” recoveries and how which one of these letters will play out for the 25.5 million Australians now.

What is not in doubt is the proportion of public debt to GDP by the time the first pandemic struck – an increase to 123 per cent, which was a direct product of fighting a global conflict.

The need for continuing public spending during the pandemic (in the form of food handouts, blankets, clothing and rent assistance) and after the war helps to put current budget deficits and debt burdens into perspective, even to what we are now experiencing 100 years later, according to CBA research of that period.

The war had also changed Australia profoundly. It laid the foundations of the modern welfare state with the introduction of war, service and disability pensions which helped support many people through the immediate years after the conflict.

Disentangling the effects of WW1 from the first pandemic makes it hard therefore to accurately assess how much the gradual withdrawal of war-focused government financial stimulus contributed to the fall in GDP just as the private sector was switching into peace time re-building mode.

As Bishop articulates in his research: “The subtraction from GDP due to the removal of the wartime stimulus was considerable, and is likely to have had a large influence on economic outcomes during the period in which the Spanish flu was spreading.”

The same applies to the workforce, which from 1919 onwards started to accommodate hundreds of thousands of servicemen as they returned from the Western Front and other theatres of the war. A house-building boom was underway, primarily financed by the Commonwealth Bank, to provide “homes fit for heroes”.

This was accompanied by an infrastructure drive as new suburbs, roads, railways and airports started to spring up during a decade labelled the Roaring’ 20s – all funded by federal and state-raised debt that ironically sowed the seeds of the financial crisis to come in later years.

But that was a long way off in most peoples’ minds as they embraced the peace and shrugged off the short-term deprivations caused by the pandemic. Neither were they to know that the experiences they shared and lessons learnt then would resonate so much with Australians exactly 100 years on.

The RBA’s James Bishop sees similarities both then and now but also cautions from drawing too many parallels from the two pandemics. After all, the Australia of 2020 is largely unrecognisable economically and socially from the fledgling nation that was just finding its feet a century ago.

But that said, history may well repeat itself. “The Spanish flu period highlights how disruptive a pandemic can be to economic activity,” he concludes in his research paper.

“In saying that, and being mindful of how different the Australian economy is now, the Spanish flu period and the strong economic growth that followed shows that rapid recoveries from pandemics are possible if the public health aspects are not too prolonged. A surprising feature of the Spanish flu episode was how quickly the labour market appears to have recovered.”