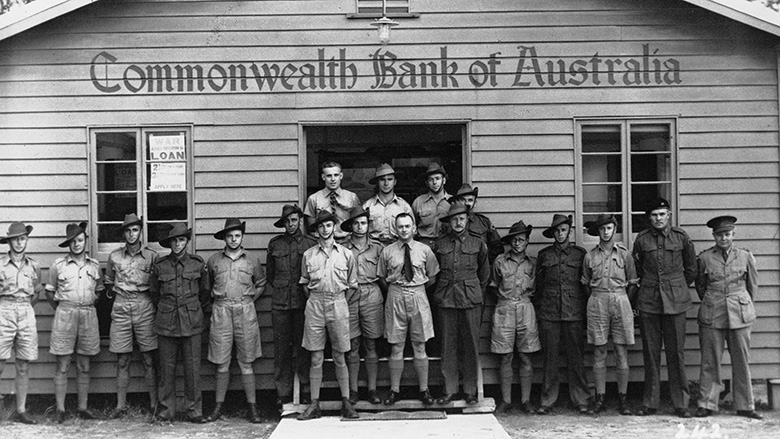 It’s been 75 years since the end of WWII. And while a lot has happened in the intervening years, the sacrifices made by so many men and women – including thousands of Commonwealth Bank staff – will never be forgotten.

Like the faces and names that appeared on its pages in ever increasing numbers, the editorials in the CBA staff magazine, Bank Notes, at the beginning of World War Two reflected the sense of foreboding but also the hope that the bank’s servicemen would return home safe and well.

Typical of those expressions were the tail-end comments of the introduction to the list of bank officers who had joined up by the time of the publication of the March 1940 issue.

“Let us close this semi-editorial note with our special good wishes to all our soldier, sailor and airman members at home and abroad. We pray for their safety as we do for their success,” it stated.

The columns of those who enlisted continued to grow as the war intensified, especially after the Japanese bombed Pearl Harbour in December 1941, bringing the Americans into the conflict and the battle to Australia’s doorstep.

But as the Bank farewelled more of its young men to the front, so too did it have to face up to the increasing numbers of them who would never come home.

The issues of Bank Notes between 1941 and 1947 – the latter ones two years after the war’s end in August 1945 as the men began to be demobbed - make for increasingly sombre reading.

In the June 1941 edition, there was a stark and sad addition to the names of those who had enlisted.

Entitled “Our First Casualty List”, 19 names of staff from places as far afield as Townsville and Melbourne, stood out under the headings of “Missing - believed wounded”, “Killed in Action”, “Wounded in action – dangerously ill” or just  simply “Missing”.

Over the next page and a half, the uniformed portraits and smiling faces of four of those who had died were displayed along with short biographies of their lives and information about their military service.

Below those was an editor’s note: “Bank Notes adds, on its own behalf and for the whole staff of the Bank, deepest regret for the untimely passing of these fine young men and extends sincere sympathy to sorrowing relatives.” 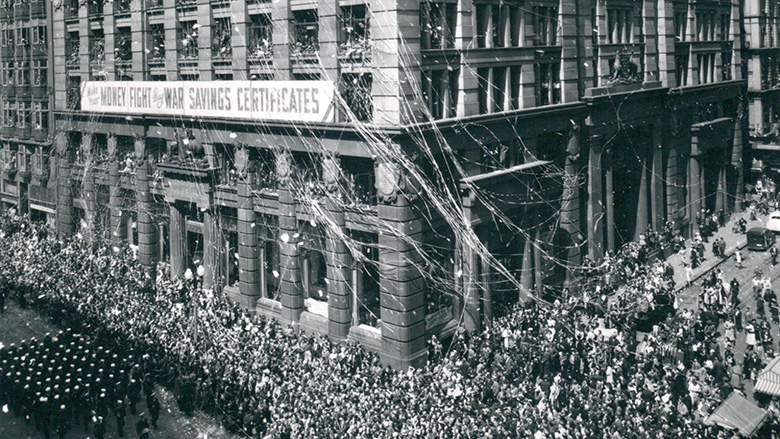 It was to be the first of many such comments and sadly a long way from being the last. Six years later in the September 1947 issue, the twenty-third casualty list appeared with the names of four airmen all “presumed killed in air operations” over the Pacific, the same style of photos, accompanied by the same short biographies about young lives cut short in the defence of their country.

It was a final mark of respect as the last of the CBA’s casualties were accounted for.

All told, those 23 lists paid tribute to 307 dead bank staff out of a total of 2,900 who served in the war. A further 87 were wounded. Eighty-eight were decorated for acts of gallantry and distinguished service and an additional 47 mentioned in despatches.

Like the conflict which preceded it a quarter of a century before, nearly two-thirds of the bank’s male staff employed in 1939 enlisted in the armed forces.

A tenth of those never to return.

A grateful and humbled bank commissioned a book at the war’s end to commemorate those who served and to record the broader role that CBA played between 1939 and 1945.

The last of the ten chapters was entitled simply “The Staff” and was written, in the words of author C.L (Charles Louis) Mobbs, as a “tribute to the officers of the bank, as is every page of the book”.

In an appendix at the end, CBA’s war dead were individually listed in the Roll of Honour.

Those pages mirror the more formal and public commemoration at the bank’s former headquarters in Martin Place, Sydney – two bronze plaques recording their names which ensure that on the 75th anniversary of World War Two’s end, at the 11th hour, of the 11th day, of the 11th month of 2020, we still remember them.