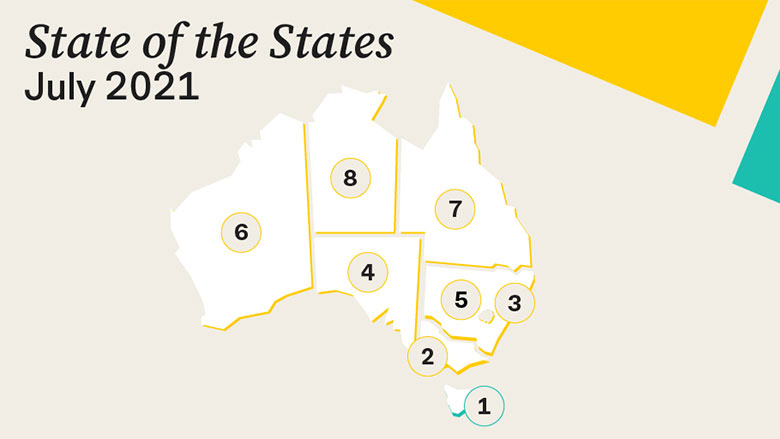 New CommSec economic data indicates TAS is out-performing, while QLD and WA show the strongest momentum due to internal migration.

Tasmania continues to lead the rankings in the latest CommSec State of the States report, while Queensland and Western Australia show the strongest momentum moving into the second half of 2021, largely due to internal migration.

The CommSec State of the States report is now in its 12th year and uses the latest available information to provide a valuable economic snapshot of how Australia’s state and territory economies are navigating the COVID-19 pandemic.

For the sixth quarter in a row, Tasmania held the mantle of the best performing economy. It led on four of the eight indicators (relative population growth, equipment investment, relative unemployment and dwelling starts) and ranked second on another two indicators (construction work and retail spending).

However, there is little to separate the other states and territory economies. Victoria was second; ACT, third; South Australia, fourth; NSW, fifth; Western Australia, sixth; Queensland, seventh; and the Northern Territory was eighth.

CommSec Chief Economist, Craig James, said: “It is important to note that all states and territories are performing solidly. That is no small feat in an environment dominated by COVID-19 with the frequent, but necessary, lockdowns and border closures. The aim is to protect the health of Australians while substantial stimulus and support measures protect economies.

“Tasmania remains in top-position in the economic performance rankings. Tasmania leads the nation on four of the eight indicators assessed. It’s unlikely to face any challenge to its dominance on the key economic indicators for at least the next six months.

“Queensland has scope to improve its economic performance in the second half of 2021 due to an improvement in the job market and rising in-bound migration. The jobless rate stands at 12-year lows.

“Similarly, the Western Australian economy has significant momentum provided by strong demand and higher prices in the mining sector. Home building is also strong with dwelling starts at five and half year highs.”