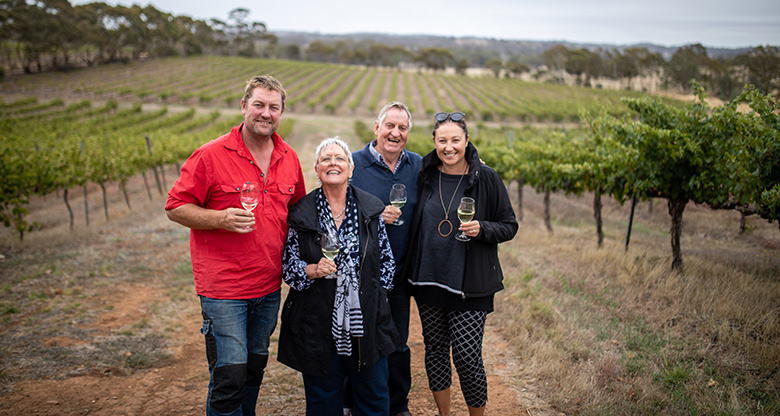 Clare Valley (SA) winemakers Matt and Ali Paulett have built their family business in new and interesting directions – but every part of the operation supports their driving vision to create success for themselves, their team, and their community.

The spectacular Clare Valley in South Australia is known as one of the best wine-growing regions on the globe, and for the Paulett family, that has been proven not only via a prestigious ‘Best Riesling in the World’ award, but through a thriving business that is as much about giving back to the community as it is about making incredible wines.

Their business includes around 200 hectares with close to 80 of those under vines, producing riesling, chardonnay, semillon, shiraz, cabernet, merlot and malbec. They also make their own beer, run a successful restaurant and export to nine countries, as well as selling direct to consumer and even running a few sheep to eat some of the waste product and create an additional income stream.

The business was started in the early ’80s by Neil and Alison Paulett. Neil’s passion for winemaking was awakened when his own father, an electrician, took on some work at a winery where a winemaker working in the business took Neil under his wing.

“He taught him a lot about how wine is made. They even made their own wine together in a bucket!” says Matt Paulett, Neil and Alison’s son.

Neil went off to study at Roseworthy Agricultural College before working for some famous Australian wineries that were always looking for Clare Valley fruit, so he knew the region’s reputation long before he moved there.

The love affair with Clare

“When my parents decided they wanted their own vineyard, they looked all around Australia, but they just fell in love with the Clare Valley,” Matt says. “They bought the property in 1982 and pretty soon, Dad and I were driving over in a removalist truck while my mum and sister came in the car with a German Shepherd that barked non-stop the whole way.”

The family’s first vintage was in 1983 – and then, in a literal baptism of fire, the Ash Wednesday blaze in the same year wiped out much of their property and what fruit was left was damaged by the smoke.

They reset and before the year was out, opened what would be the 13th cellar door operation in the region. Today there are dozens.

The business is now headed by Matt and his wife, Ali, who has been full time in the business for about 10 years, after closing her own design and drafting operation when she realised there were not enough hours in the day for her to do everything.

“It was a hard decision but there was a lot going on here. I had decided to study wine marketing at Adelaide Uni and we wanted to open a restaurant and build the cellar door business, plus we have three children.”

Matt says his ‘real’ winemaking career began in 1999 after he too graduated from Roseworthy, but he’s always worked in the business.

“I was always an outside kid so I’d be handpicking fruit or shovelling the stalks,” he says.

Every part of the business is designed to complement the others and diversify risk. Ali explains that direct-to-consumer sales offer the highest margin, so the restaurant was established not only as another income stream but to increase foot traffic to the cellar door.

“The restaurant has grown our marketing database to 15,000,” she says. It has also become very successful in its own right.

“We thought we might do 15 covers a day. Within six months of opening, we had to put in a second kitchen and expand the seating to cater for 90 covers, with multiple sittings on weekends. In the last few years, we have won multiple awards including Great Wine Capitals of the World, Best Wine Tourism Restaurant and Gourmet Traveller – Cellar Door with Best Food. It has given us a huge amount of exposure and credibility.”

Since the restaurant opened its doors in 2015, the staff numbers have swelled from six to more than 30. “We have a real focus on training, and we have taken on a number of apprentices, plus we work with the local high school and primary school to show our support for this community however we can. We try to do things that are good for our brand but also good for Clare Valley. We’re very community-oriented and we always help where we can. We know that for us to succeed, Clare Valley has to succeed.”

Both Matt & Ali have been active in associations and committees, with Ali being on the Board of the Clare Valley Wine & Grape Association, as well as the Hutt River Board that runs the Visitor Information Centre.

“Staying active and contributing in these spaces keeps us on the pulse of what is happening and enables us to contribute at a higher level on issues such as employment, tourism and water supply within the region. We’ve been lucky enough to be included in many roundtable discussions with government ministers as well as the South Australian premier,” Ali says.

Relationships are more than just loyalty

Commonwealth Bank has been part of the Pauletts’ success story from the beginning, but Ali says they don’t stay with the bank out of mere loyalty.

The most recent of those big things was the purchase of a neighbouring property in the tightly held Polish Hill River subregion of the Clare Valley. That property is certified organic, and the Pauletts are excited to be releasing their O Series low-carbon-footprint organic range, which they anticipate will be especially well received in Nordic markets.

With the new purchase only recently settled, Ali and Matt are already thinking about what comes next.

“We always try to keep an open mind and make decisions that can keep us ahead of the curve. I can’t say much now, but there are some very exciting things coming in the next 12 months that will boost our brand, increase our exposure and bring even more foot traffic.”

If there's an opportunity you want to explore, talk to a CommBank Regional and Agribusiness Specialist today.