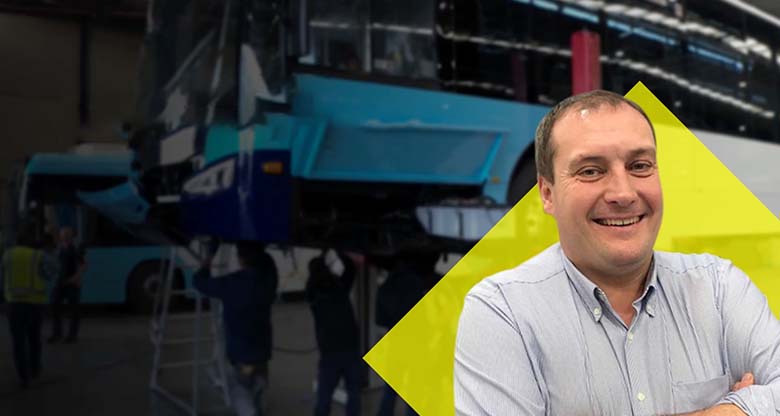 Building the buses of the future

Scott Dunn, chief executive of Custom Denning, based in St Marys in Western Sydney, says electric buses will transform transport over the next 25 years, and lead businesses and commuters toward a more sustainable future.

He’s more qualified than most to make the prediction. From growing up above a bus depot in England, and tinkering with his first engine at age five, to listing the family business on the London Stock Exchange, buses run in Scott’s DNA.

Last year, he built Australia’s first electric bus, and in just 6 short months he achieved a feat others would have spent years striving for, driven by his intrinsic knowledge about vehicles, his astounding work ethic and application of the latest technology.

“I knew straight away I needed to build an electric bus. The benefits to the environment and lower operating costs alone, would drive the change.”

“I had experience operating electric buses in Europe and had seen them steadily gain popularity. All I needed to do here, was build the best bus and ensure that our federal and state governments knew we had the vision and capability,” Scott said.

In 2009, Scott Dunn founded The Dunn Group in the UK, and then seven years ago decided to emigrate and expand the business in Australia. In 2018, the opportunity to acquire Custom Bus came up after it went into voluntary administration in 2018.

He restructured his business interests, selling off all holdings except Custom Bus and has been focused solely on manufacturing electric buses for the past 18 months. He purchased Australian bus manufacturer Denning Manufacturing in 2019, bringing two of Australia’s most iconic brands together under one banner, with big plans for the future.

Today, the business is known as Custom Denning and is the only company in Australia manufacturing electric vehicles (EVs).

Seizing the opportunity to innovate

While many businesses ground to a halt when COVID-19 struck, Scott re-engineered his production line, upskilled his staff and built the first electric demonstrator model, called Element. It hit the road in November 2020.

An engineering team of six plus Scott worked on the project. Rather than buying in new talent, the existing workforce were upskilled, learning from Scott’s contacts in Europe.

“They taught us the componentry, how to put it together – it’s common sense really,” says Scott. “I built the first one. Literally, I built it myself: I welded it; I bolted every component.”

He says the bus outperforms anything on the market and has the lowest energy consumption of any bus of its size in the world.

“I thought about how to make it easy to maintain, with low running costs – I’ve brought together all the modern technologies and even ideas I’ve had from years ago. Some of the simplest things are the best sometimes,” he says.

“We’re using 70 percent of the energy of imported competitor models, which results in using the batteries less and therefore increasing their useful life. Our batteries come with a 10-year warranty, but we believe they will last up to 18 years,” says Scott.

The team built four demonstrator models which were trialled by bus companies across New South Wales. Custom Bus has now started production of the Element, with its first order coming from Busways, a longstanding customer for more than 65 years.

Building for the future

Scott says he moved into manufacturing electric vehicles because it not only made economic sense but was a step towards a more sustainable future.

“We’ve got to look after what we’ve got, haven’t we? We’ve got to leave it right for our children and their grandchildren.

“The Australian market is tough and performance expectations of vehicles are high due to the extreme heat in which they operate. This has made us think more innovatively and produce vehicles and technology that is attractive to similar markets, such as the Middle East.”

“Build it well here and it will work in other markets. Our plan in the next 18 months is to export this product to the UK and Europe,” says Scott. He expects to recoup his investment within six years.

Contributing to the local economy

Custom Bus started with six employees and now employs 160. Scott says Western Sydney is a great base for manufacturing, supported by a growing population.

“It’s not just about building vehicles and making money; it’s about creating a long-term future. We can employ a lot of apprentices and create a future for people out here.

“If we can create market demand for 1,000 vehicles a year, we’ll create another 700 jobs. This region is brimming with opportunity and we’re here for the long run to support Western Sydney.”

Scott says without CommBank’s support, particularly in the early days, the project would not have come to fruition.

“They believed in the story and the forecast, not historical trading,” he explains. “If they’d looked at historical figures, they’d never have funded Custom Bus. So, they had to believe in the future, which banks don’t generally do. They were sold on the vision, especially on the electric vehicle side.”

From here, Scott is considering what other products Custom Bus could produce.

“Our approach is easily transferrable to anything that’s got wheels,” he says. “We’ve got the best vehicle in the world, it’s crazy how we’ve done it.

“The future is quiet, clean and energy efficient. That will attract a lot of people.”

This article is published solely for information purpose. As this article has been prepared without considering your objectives, financial situation or needs, you should before acting on the information in this report, consider its appropriateness to your circumstances and if necessary seek the appropriate professional advice. Any opinions, views of contributors, conclusions or recommendations are reasonably held or made, based on the information available at the time of this article’s compilation, but no representation or warranty, either expressed or implied, is made or provided as to the accuracy, reliability or completeness of any statement made in this article.