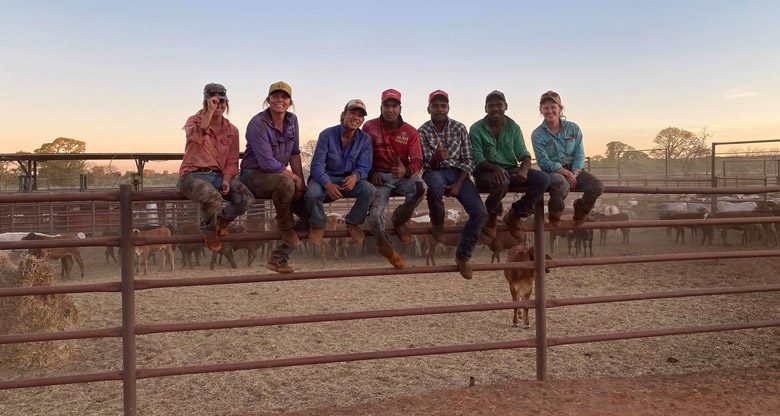 KAPCO is a coop of Indigenous-owned pastoral stations, focused on enabling our Traditional Owners to further engage in the economy.

The Kimberley Agriculture and Pastoral Company (KAPCO) is a cooperative of Indigenous-owned pastoral stations in northern Western Australia. But it’s also much more than that. It’s the culmination of nearly 20 years of work by Indigenous leaders to create not only a successful agricultural enterprise, but an opportunity to support meaningful employment for Indigenous people.

Mt Anderson, Myroodah, Frazier Downs and Bohemia Downs stations are separately owned under native title, but operate under a single management structure to take advantage of the economies of scale and to bring rigour to operation a large scale agribusiness.

Myroodah was the final station to be rolled into the cooperative, which now controls over 750,000 hectares of country and 30,000 head of cattle.

Robert Watson is Chair of both KAPCO and the Walalakoo Aboriginal Corporation which was granted the pastoral lease of Myroodah in 2019. He says the success KAPCO has achieved would not have been possible without CommBank.

When Myroodah was returned to its Traditional Owners from the Indigenous Land and Sea Corporation, the cattle which came with the land were not included in the transition, leaving KAPCO to find over $11 million to purchase the stock. Not only that, but KAPCO found there was a lot of work needed on the station infrastructure and would require considerable investment.

CommBank’s Jarred Paterson says this was extremely challenging, because although the land value was incredibly high, the property was not suitable as security because it was held under native title, which means it could not be sold or transferred freely.

We were able to work with KAPCO, and create a solution that sat alongside finance from the Marra Worra Worra Aboriginal Corporation and Indigenous Business Australia. For our part, this included lending against the value of the stock.

Robert Watson says the impact of the Bank’s support cannot be overstated.

“We would not be where we are today without CommBank. I say that wholeheartedly,” he says.

“We created scale in the business which gave the Bank confidence, and in return, the Bank has genuinely made a massive contribution towards transforming the lives of a large group of Aboriginal people. Their support has given us the ability to move forward in our plight and change our trajectory.”

The goal of KAPCO has always been to enable Indigenous people to truly engage in the economy.

Training and work opportunities are designed to filter back into communities, beyond the boundaries of the four properties. “People often come into an entry-level role, but the goal is always to build them up. We want to give people exposure to different ways of working, to learn how to acquire and apply skills and build a career.”

Not everyone stays with KAPCO – and Robert sees that as a good thing.

“Some people find opportunities within the business and they stay and grow with us. Some leave and create their own contract business utilising the skills they have learned in fencing or maintenance or any of the countless tasks that are necessary at a large station, then they come back to us as contractors, and take on employees of their own. And some people end up doing something entirely different, but the experience they get with KAPCO supports them to achieve new goals.

‘We’re creating opportunities, and this is going to change the lives of Traditional Owners. All of these individuals own our vision.”

Robert has a near endless list of ideas for the enterprise, and he says one of CommBank’s most valuable contributions is business insight and financial expertise, to help them make the right choices.

“We might want to look at boxed beef marketing, jerky, pet food, world superfoods. In fact, there are more opportunities that we don’t even know about than all the ones we do know about.”

“CommBank has the expertise to help us narrow our focus and to have the hard conversations about which options to pursue.”

He says the hard work CommBank put in to understand the KAPCO business case has helped KAPCO create a business model that could be applied in other parts of the country.

“CommBank has given us the opportunity to have a red hot go at changing the future,” he says.

Do you have an agribusiness opportunity you'd like to explore?

This article is published solely for information purpose. As this article has been prepared without considering your objectives, financial situation or needs, you should before acting on the information in this report, consider its appropriateness to your circumstances and if necessary seek the appropriate professional advice. Any opinions, views of contributors, conclusions or recommendations are reasonably held or made, based on the information available at the time of this article’s compilation, but no representation or warranty, either expressed or implied, is made or provided as to the accuracy, reliability or completeness of any statement made in this article. Commonwealth Bank of Australia ABN 48 123 123 124.