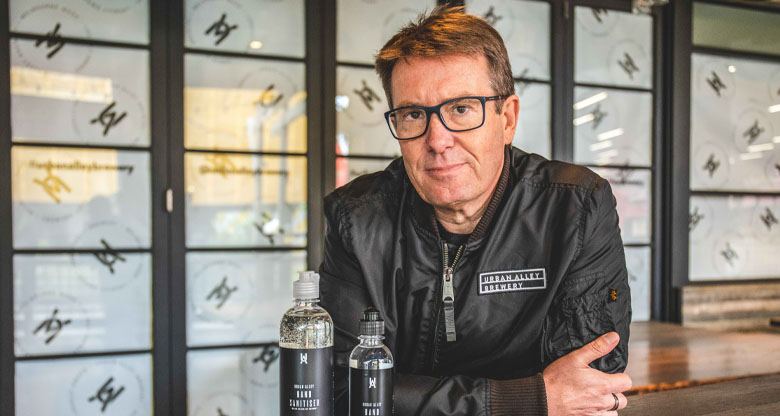 When crisis turns into opportunity

Publican and craft brewer Dean Grant called in 32 years’ worth of favours to keep his business running and staff employed in the face of coronavirus, switching from beer to hand sanitiser.

Dean is founder and managing director of Urban Alley Brewery, an independent craft brewery based in Melbourne’s Docklands district, which he runs with his business partner, Bruce Davey.

When coronavirus restrictions shut down the pub, Dean immediately moved to offer delivery of his craft beer, but it wasn’t enough to keep all his staff employed.

“I had a choice: I could sit back and say there’s nothing more I can do, or I could come up with an idea.” Dean says.

The idea was to start producing hand sanitiser, but the shift proved far more challenging than Dean could ever have imagined.

“I talked to my head brewer and we came up with a formula, but you could not buy ingredients. We decided to use our own hop oil, but we still had to source ethanol. And then I found you could not buy bottles. You could not get caps. You couldn’t get pumps. With everything shut down, it was nearly impossible.

"The whole thing nearly fell over three times a day, every day, but we kept just solving each problem as it came up."

“I called in every favour I’d racked up in 32 years in the industry. I had been producing vodka for the last 17 years at Alepat Taylor who helped with the ethanol and were able to slot me into their production run to get the product packaged. We built a website, created a brand. Myself and the executive team worked 15-hour days for 21 days straight, including over Easter. The whole thing nearly fell over three times a day, every day, but we kept just solving each problem as it came up.

“We had no logistics. Semitrailers full of sanitiser showed up at the pub so we had to clear all the furniture to fit it in. All the balls were in the air. But failure was not an option, so we kept going.”

Urban Alley liquid hand sanitiser was first to market, followed by a gel product. Pretty soon Dean and his team were pumping out 135,000 units a week from two factories, creating 100 new jobs across the supply chain.

“I’ve never had a business turn over $2 million in its first four weeks before!” Dean says.

Remarkably, Dean now has the process running so well that it’s likely to continue even when demand slows after coronavirus.

“We’ve managed to reduce our COGS (cost of goods sold) to the point that it’s a really good business. We’re getting it to the point where our locally made product can compete with imported products.”

Dean has some strong contracts lined up, from a supermarket deal to government orders.

The whole idea relied on being able to fund the new operation, and thankfully Dean and his wife had a CommBank ‘Viridian’ loan with a revolving line of credit to tap into.

“There’s no other way I could have done it. In this environment there was no credit available for buying stock. Everything had to be paid for up front. I ended up holding $2 million worth of stock, but I knew early on I was onto a good thing.”

Got an idea you’re ready to turn into reality? Talk to a CommBank Regional and Agribusiness Specialist.