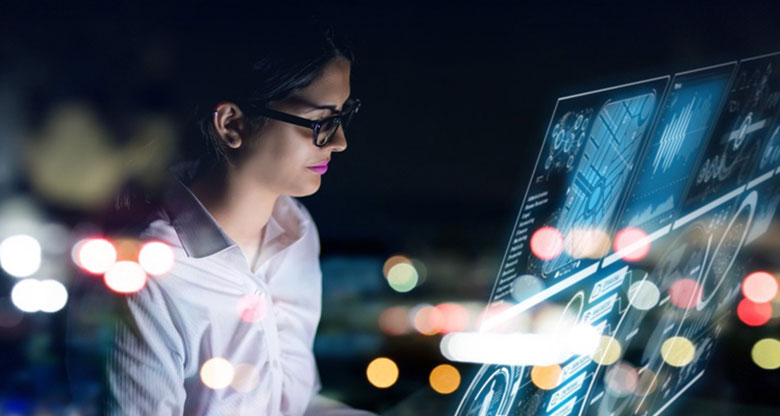 Tech is the means to an end, not the end – what 'going digital' really means

The following article has been prepared by Business Insider in partnership with the Commonwealth Bank of Australia.

The rise of the platform economies, the disruption to video rentals, movies, bricks and mortar retail, advertising and media, to data storage, the taxi industry, restaurants and take out, hotels, and other industries has all been possible because technology has empowered improved processes, digitisation, and in doing that allowed a laser focus on customer needs, wants, and behaviours.

That in turn has then improved the abilities of these first movers and disruptors to better serve their customers, build scale, and fundamentally change what previously were viewed as stable businesses and industries.

Think companies like Uber and Lyft, Airbnb, AWS, Amazon itself, Google, Facebook, Netflix, and so on. Using technology they have stolen a march on established business and are gathering a substantial first mover advantage on many of hitherto dominate businesses. In some cases they’ve completely remade the business operating environment and crushed incumbents.

Against this backdrop every business owner or leader across the globe is going to understand they need to digitise if they have a hope to survive this new competitive environment, let alone thrive.

In 2016, the World Economic Forum’s (WEF) White Paper on Digital Transformation of Industries said there was a “widespread recognition among leaders in most industries that the role of digital technology is rapidly shifting from from a driver of marginal efficiency to an enabler of fundamental innovation and disruption”.

The WEF said digitisation was “the cause of large-scale and sweeping transformation across multiple aspects of business, providing unparalleled opportunities for value creation and capture, while also representing a major source of risk”.

Niels Aillaud, chief digital officer at Whirlpool, said, “we are living in the digital world and companies that don’t understand this or don’t necessarily move in to join their customers are at risk today”.

How those opportunities and risks will manifest will depend on the business and industry. Most business leaders probably understand that,and have probably been involved in the road to moving some operations to digital platforms.

But what does it mean to fully digitise a business?

“for some executives, it’s about technology. For others, digital is a new way of engaging with customers. And for others still, it represents an entirely new way of doing business. None of these definitions is necessarily incorrect. But such diverse perspectives often trip up leadership teams because they reflect a lack of alignment and common vision about where the business needs to go. This often results in piecemeal initiatives or misguided efforts that lead to missed opportunities, sluggish performance, or false starts”.

The differences of understanding in what it means to be digital, Dorner and Edelman say, can be clarified by companies and business leaders seeing it as, “less as ‘a thing’ and more ‘a way of doing things’.”

It’s an approach which requires a change of perspective from the top all the way through the business.

They then broke the concept of digitisation down into three strategic features:

These attributes are the essential ingredients of any digital strategy. But they themselves need to be better understood in order to turn theory into practice.

Creating new value at frontiers seems an aggressive place to start. It may seem more intuitive for businesses to work through the three attributes the other way around: by building foundational capabilities, creating value, and then looking at new frontiers.

But Dorner and Edelman say, “being digital requires being open to re-examining your entire way of doing business and understanding where the new frontiers of value are”.

By necessity that means examining existing business operations and sectors as well as “developing entirely new businesses in adjacent categories”.

The process of digitisation requires an understanding of the developments in the economy, the marketplace, and trends in customer tastes and expectations.

In a more traditional management language, Dorner and Edelman are simply saying digital starts with an environmental scan. It’s just that this environment is busier than ever before and getting busier. So, some new scanning tools are required.

In terms of creating value in your core business they say that “digital’s next element is rethinking how to use new capabilities to improve how customers are served. This is grounded in an obsession with understanding each step of a customer’s purchasing journey—regardless of channel—and thinking about how digital capabilities can design and deliver the best possible experience, across all parts of the business”.

The point is that companies making the journey need to be channel agnostic. Whirlpool’s Aillaud says digital “is not just another channel”. The whole world is digital.

But it’s the focus on the customer which will be a recurring theme throughout this report. So too will the associated mantra – “be like Jeff” (Bezos).

And how do you do that?

First cab off the rank is “mindset”. You’ll see that a lot of that in this report: a digital mindset and organisational culture that empowers. It recurs in the literature and in successful digitisation journeys again and again.

So while Dorner and Edelman say “digital is about using data to make better and faster decisions, devolving decision making to smaller teams, and developing much more iterative and rapid ways of doing things,” that requires a digital mindset.

That is, “a digital mindset institutionalises cross-functional collaboration, flattens hierarchies, and builds environments to encourage the generation of new ideas. Incentives and metrics are developed to support such decision-making agility” they say.

At its core, digital is about a business understanding itself, its people, its environment, and its customer. It’s about having a laser focus on delivery to customer by establishing a flexible organisational structure which empowers a digital mindset. And then it’s about having the right IT systems and architecture to enable all of this.

Tech is the facilitator, the means to the end, not the end.

What digitisation is not…

It’s worth dealing with some common misconceptions about what digital and digitisation is, and what it is not.

One of the better takes on this is the one which was published by AT Kearney Partners Martin Fabel and Michael Hu along with their colleague, Senior Manager, Stuart Klein. The writers debunked what they called “Eight Common Misconceptions of Digital Transformation ”.

Fabel and his colleagues said, “a lot of tales are passed from one digital guru to another that don’t consider the realities of many established enterprises”. So, in this world where digital is mystified and set apart from leaders who may feel they don’t have organisational purchase on digital consumer behavior (even though they can often be the fastest adopters of it), they set about the task to “demystify digital transformation, separating the truths from the myths based on our hands-on experience” (our emphasis).

It’s this focus on reality which is so powerful because just as economics needed the behavioural school to wake it from its overly mathematical reliance, so too does the process of digitisation need the practical application Fabel and Hu brings too, as they said, “separate the hype from reality”.

It doesn’t need to be radical

Locking your creative thinkers in a room to reinvent the wheel misses the point that while creative or design thinking is helpful, “it cannot be used to drive every workshop and ideation session,” Fabel and his colleagues say.

Indeed, they point out something you’ll see later in this report. That is, if there is to be a radical transformation then the business must take several steps and work through a process of testing and learning about the new idea.

They don’t mention it directly and it’s something covered later in this report, but to facilitate this step through process of testing and learning requires leadership and management changes.

Likewise, AT Kearney’s concept of MVP (minimum viable product) the authors mention as the first step along the road also comes out in much of the literature and practical examples as a critical step in the process of a digital business transformation.

Having built the MVP the authors say the next step is that “multiple rounds of use case focused initiatives are necessary to build competencies and capabilities”. That’s test and learn, right there. Finally the business case has to evolve “from MVP to stepping stone to North Star” they say. It’s fine to think big, “but prioritize what drives the financial impact, even if it’s incremental”.

AI, ‘thinking like a start-up’, and data-centrism are not business plans

“Artificial intelligence (AI) and robotic process automation (RPA) are having a profound impact on the fundamental components of many businesses—from financial reporting and inventory management to customer service, but both require a deep understanding of the problems and processes they’re attacking to make the difference,” said AT Kearney Partners Martin Fabel and Michael Hu (our emphasis).

This is another theme you’ll see recur across this report. It is not the tech itself, or its application, that is the answer or cure all. Rather, the business must understand how to deploy the technology and understand how it creates value.

Today’s tech leaders and business disruptors have embraced data, its flow, and its informational content to build better systems and process to run their business and serve their customers.

But, in successfully examples this use of data and roll of the processes that collect and then deploy the information through the business and back to the customer are strongly aligned with the overall business strategy of the company.

That’s the point Fabel and his colleagues make when they say a company that collects data as part of its digital transformation will add value but note that: “any digital transformation that is not closely connected to the desired business outcome will never end and is likely to favor the past instead of the future”.

“Long-term success requires creating a proper data management structure based on the end objectives,” they say.

That’s a point we’ll get to when we talk about building out a digital strategy.

AT Kearney’s entreaty that data and analytics should be thought of “in terms of data definition and quality, governance, storage, integration, presentation, and access and archiving”, is a key one to remember.

(This is particularly the case considering the recent implementation of the EU’s General Data Protection Regulation and with increased customer scrutiny over data ownership and usage.)

Similarly, there’s a temptation to be like a start-up, to have that laser focus on building the product or business, to have that desire to disrupt the industry being targeted.

But Fabel, Hu, and Klein say that while “forward-thinking companies instill speed and accountability in everything they do” it is focus that is the key to a start-up’s success and larger companies often “have an array of commitments that prevent a start-up culture from simply being flipped on”.

It’s why partnering, something we’ll discuss later in this in our full report, can be such a powerful part of the digital transformation.