Increased demand for industrial property is driving up rents and now development is on the rise.

The pandemic has boosted user-demand for industrial property, most notably warehousing and cold storage. Online retail has also accelerated during the lockdowns, boosting demand for more and higher quality industrial space, in what is a global phenomenon.

In some parts of Australia, the construction of new industrial property has not kept pace with the demand, creating an imbalance in the market and driving rents higher at a rate rarely seen in the sector.

In the 12 months to June 2021, rents in the strongest industrial submarkets have increased by as much as 10% (for secondary properties in Melbourne’s west), with many other submarkets showing growth of 4%-6% per annum, most notably in Perth and Adelaide.

Of the speculative space under construction, 46% of it is in projects larger than 20,000 square metres. This is aimed at satisfying the very high levels of user space demand in the larger warehousing sector.

Both Sydney outer central-west (e.g. Eastern Creek, Erskine Park) and Melbourne west (e.g. Truganina, Laverton North) submarkets have the largest share of total construction underway, at more than 500,000 square metres each this equates to 22% and 21% of the total respectively. 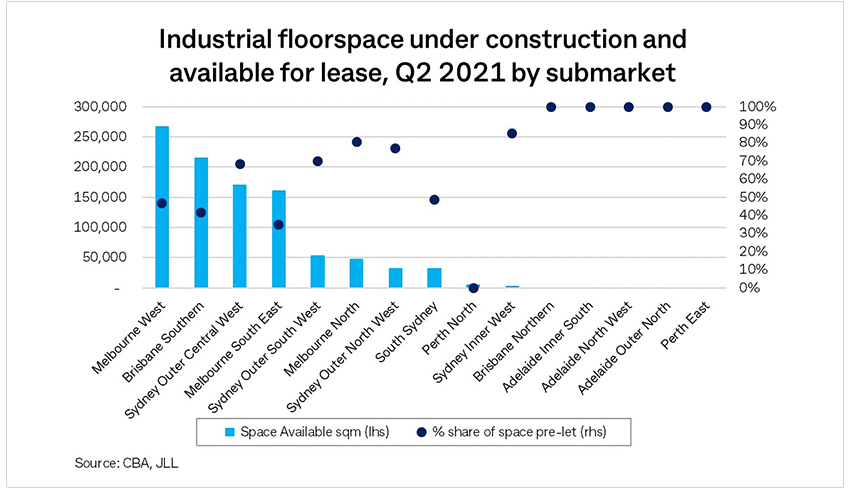 Sydney outer central-west and Melbourne west, alongside the Brisbane southern (e.g. Larapinta, Crestmead) submarket, have the most space (square metres) available for lease, although Sydney outer central west has a higher proportion of its total space pre-let at 68%. Melbourne south-east, with its fairly substantial 245,000 square metres of space under construction, recorded only 35% pre-let in Q2, 2021.

Not all markets have seen a rise in construction and/or more speculative development. There are also several submarkets with little or no space under construction which is available for lease, including Adelaide’s main industrial submarkets – north-west and outer north.

Looking forward, the construction pipeline remains strong with a further 3.9 million square metres with plans approved. The sector has gone through a phase where user demand has been greater than supply. Although solid demand for warehousing is expected to continue, a shift to greater supply will mean slower rental growth for a time, mainly in those submarkets with lower pre-leasing levels.