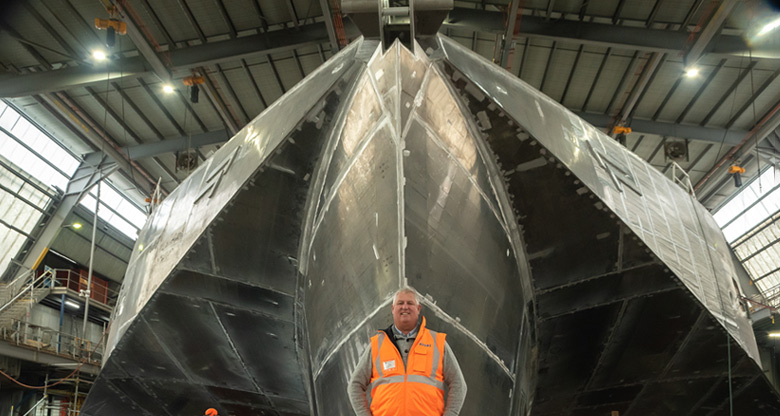 Riding the tides of business success

The world’s fastest, most efficient and most environmentally sustainable high-speed ships are built in Tasmania by a company called Incat – started by an entrepreneurial fisherman.

Incat is a CommBank Business customer based in Hobart, where Chairman Robert Clifford originally ran a fishing operation. Looking for something more fulfilling, he started offering river cruises on the Derwent in the 1970s.

When the Tasman Bridge collapsed in 1975, Robert’s business suddenly transformed into a passenger ferry service as there was no other link between east and west Hobart. In the space of just three years, the fledgling operation had carried nine million people.

Robert’s son Craig, now Managing Director of Incat, recalls the day the bridge went down. “It was a madhouse! Things were happening 24/7. Our loungeroom was full of coins that people had paid their fare with because nobody had time to go to the bank!”

While the bridge was rebuilt, there was no going back for the business. International Catamarans was born – later to be rebadged Incat.

“Dad’s a natural born entrepreneur,” Craig says. “He saw the opportunity to build boats for the local, national and then international markets, and he took it.” Today, ships of around 100m in length are the bread and butter of Incat, which sells to transportation customers worldwide. Recently, this has included a 100m build for the government of Trinidad and Tobago, a 111m ship for a Spanish customer, and a 76m ship for Korea.

“We take great pride in what we do and in running this business from Tasmania,” Craig says.

Incat moved to CommBank because it offered personal, local support

“This proved to be a key point of difference, as Incat Group had long sought local relationship management,” says Incat’s banker Joe McCulloch. “Over the past eight years we have supported the Incat Group with a number of complex solutions. I’ve worked closely with the client, our state manager and other members of our team to support them being successful long into the future.”

Craig says the local access to the Bank means a lot to the business.

“We had met the local CommBank team a few times and we turned the social connection into a business connection. We now have local support who knows us, our business and the local environment, which we weren’t able to get in the past. It makes a difference.”

“We have a very open-book policy with the Bank, sharing our successes and our challenges.”

Unsurprisingly, shipbuilding has a long lead time, often around two years from contract to delivery, and sometimes much longer. Because orders were already in place, Incat was able to keep operating through the pandemic.

“Pre-Covid, our order book was very full and we were nearly at the point of knocking back orders,” Craig says. “Covid slowed everything down, but I think we’ll have a better recovery than other transport sectors. You can social distance on a ferry in a way you can’t on a plane.”

Incat employs around 500 people across a range of roles, including engineering and drafting, plus trades like plumbing and electrical.

“The challenge is skills retention and development. We offer a lot of apprenticeships and we run a lot of training programs. Australia is very well regarded in shipbuilding and we invest heavily in maintaining that reputation. We offer the right mix of technological access, experience and quality of work.”

The Incat of today includes more than 70,000m2 of undercover production halls, with two dry-dock areas capable of accommodating up to six vessels under construction.

Ready to move your business forward? Talk to a CommBank Regional and Agribusiness Specialist.

This article represents opinions and views of the customer's personal experiences only and has been prepared without considering your objectives, financial situation or needs. Before acting on this information, consider its appropriateness to your circumstances. Commonwealth Bank of Australia ABN 48 123 123 124, ASFL and Australian credit licence 234945.