Australians name ‘travel’ as their number one reason to save, with 70% planning international or domestic holidays in the coming months.

Australia’s borders reopen to international travellers on Monday 21 February and it seems many Aussies are itching to get away, with new research from the Commonwealth Bank showing 51 per cent of respondents are saving to travel in 2022.

In fact, over 70 per cent of Australians are dreaming of the top travel destinations with many planning to travel either internationally or domestically this year. The desire to save and to travel is consistent across all ages according to the CBA research.

Australians’ urge to get away has already been reflected in spending trends in January, with data from the most recent CommBank Household Spending Intentions (HSI) Index showing a 14.9 per cent increase in travel spending intentions in January 2022 in comparison to January 2021. Increases in spending were recorded in all travel categories, including travel agents, airlines, motor home & RV rentals, cruise ships, bus lines and airports.

CBA’s Executive General Manager, Everyday Banking, Kate Crous said: “It’s great to see Australians are planning to take a much-deserved break this year. Encouragingly, saving for a holiday was the third most popular type of goal that customers chose to create within the CommBank app Goal Tracker tool in both 2020 and 2021.”

After a challenging few years, wanting to get away and relax is the top reason motivating Australians to travel (65 per cent). This is followed by visiting family and friends (52 per cent) and exploring new places (46 per cent).

When it comes to where Aussies plan to travel, topping the list was ‘somewhere we can be surrounded by nature’ (37 per cent), followed by ‘a beach or tropical island’ (34 per cent). And, when Aussies do end up getting away, the majority of us will be going with a partner (62 per cent) compared with on our own (22 percent), while more than half (58%) of those who have school aged children said they will be taking them.

Holidays come at a cost

Sensibly, Aussies agree they will save for their holidays. On average, Australians plan to save and spend $5,072 on travel in 2022.

Behaviours around savings are supported by the latest CBA and Melbourne Institute Australian Consumer Financial Wellbeing report  which found elevated savings balances are helping to keep financial wellbeing levels higher than they were before the pandemic began.

However when it comes to saving for holidays, CBA research shows the majority of Aussies have saved less than 50 per cent of the desired amount so far (average of $1,848 saved for travel).

“We’re seeing that while people feel excited about travelling again, one in two Aussies are worried about the cost of travelling – and this is even more common for young adults,” Ms Crous said.

“To help mitigate concerns, there are a number of tools online and in our banking app that can help customers set savings goals and track their progress. There are also payment options that allow customers to break up the cost of their holidays – so they can focus on enjoying them,” Ms Crous said. 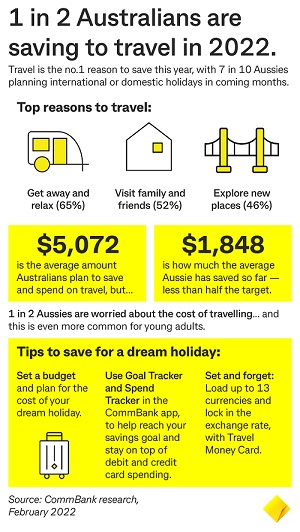 The CBA research shows one third (34 per cent) of people say they’d be more likely to travel or travel more if they could spread out the payments over time, with this increasing to 1 in 2 (54 per cent) for those under 30 years old.

More than one in five (22 per cent) Australians said they will pay for their travel using their frequent flyer rewards points, while one in 10 (10 per cent) plan to redeem vouchers they have from earlier travel plans that were cancelled / postponed due to the pandemic.

According to industry research by RFI Global, over half of the Australians who are likely to travel overseas in the next 12 months would prefer to make payments using a prepaid travel card with locked in exchange rates and the ability to load multiple currencies onto the card.

CommBank’s tips to help you save for your holiday

About the CBA research

About the CBA data