Despite continued weakness in some spending categories in Victoria, spending on goods and services broadly tracked sideways in the week ending 24 July.

Total household card spending on goods and services is 9.8% higher than a year ago. 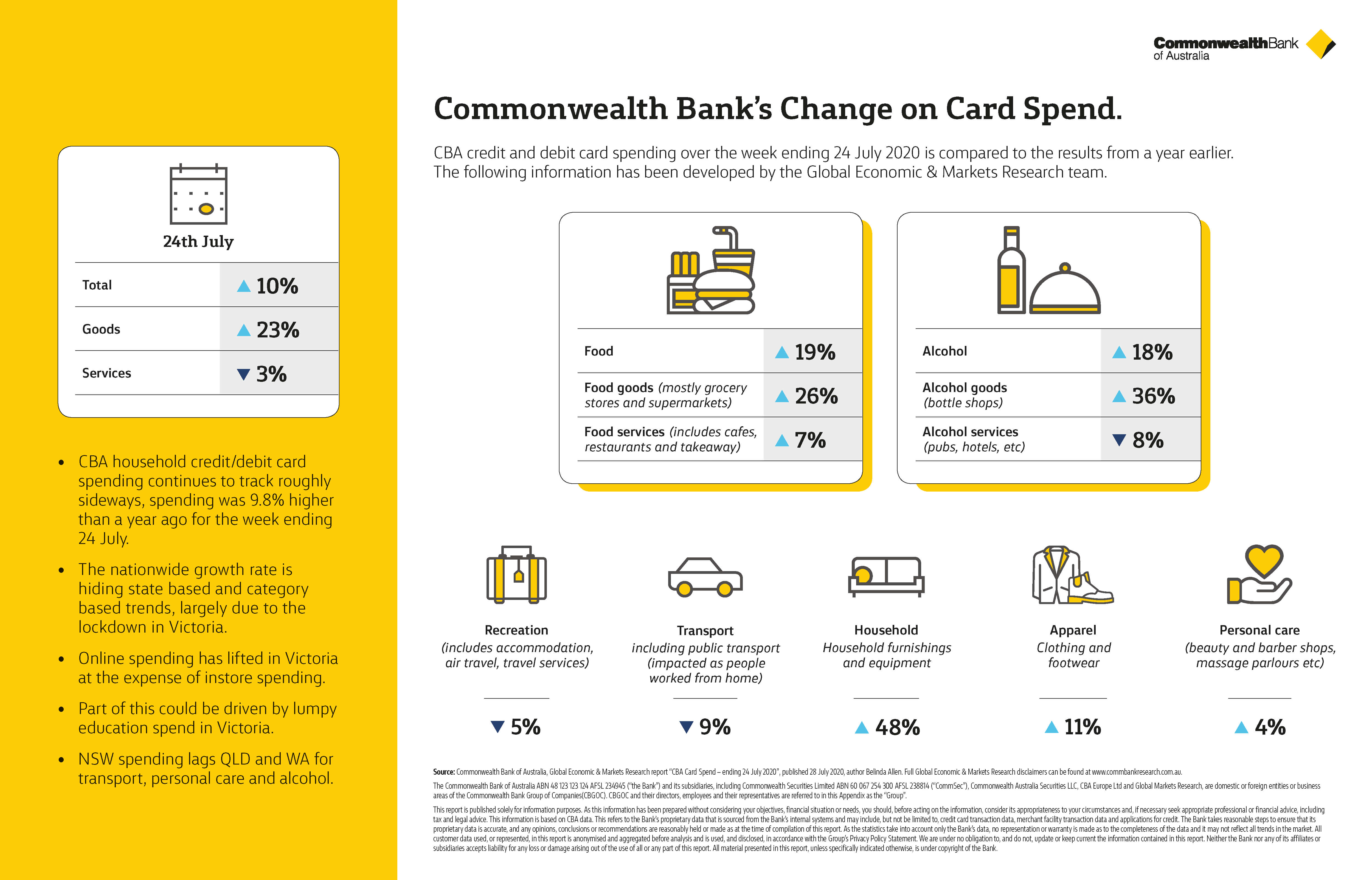 Stage three lockdowns in Melbourne have caused a drop in in-store spending in Victoria. NSW is also lagging WA and Queensland where there is no community transmission of the coronavirus.

Conversely, online spending in Victoria is rising sharply. This is partly driven by university fees which are paid online. The semester dates have moved due to the coronavirus.

Spending on clothing and footwear remains negative in Victoria, although it bounced slightly. Spending in NSW is underperforming WA and Queensland.

Personal care spending in Victoria has fallen sharply due to stage three lockdowns. It fell further in the latest week compared with a year earlier but remains above the trough in the first lockdown.

Likewise, spending on transport continued to fall in Victoria relative to the same period a year ago, but remains above the lowest levels of the first lockdown. With work from home orders being encouraged again in NSW, transport spending in that state is underperforming WA and Queensland.

The shutting of venues in Victoria has seen spending on alcohol fall in the state. Spending in NSW also softened in the latest week driven by alcohol services spending, but it remains positive in annual terms . Spending on alcohol in WA and Queensland continues to grow year-on-year.

Food spending in Victoria fell, driven by less eating out amid lockdown restrictions. Food spending remains steady in other states. Spending on food services in NSW fell slightly in the latest week.

There is some week-to-week volatility in spending in the smaller jurisdictions, but it remains roughly at the same level over recent weeks. The ACT is underperforming the Northern Territory, Tasmania and South Austraia.

Household furnishings and equipment spending is easing slightly but remains strong at 48% above last year’s levels.

Spending on clothing and footwear is 11% above last year’s levels, while spending on personal care (hairdressers, barbers and beauty salons) is softening and is now just 4% higher than the same week a year ago.

Spending on transport has also eased and is 9% below last year’s levels.

Spending on recreation (including accommodation, air travel and travel services) continued its gradual recovery to be down 5% from the same period a year ago.