An easing of the lockdown restrictions has led to a slow increase in spending, rather than a rapid lift.

Analysis of CommBank credit and debit card spend data to 5 June shows momentum in spending improved slightly. Spending sits 5% higher than a year ago, compared with 3% in the week ended 29 May.

Momentum on goods spending slipped slightly, while services spend improved a little with the easing of restrictions helping the services economy a little more.

The largest lift in spending momentum was seen in the personal care category as restrictions for beauty salons were eased in the largest states, and pent-up demand was satisfied after three months of closures. Annual growth was up 12% on the same week last year, compared with down 15% in the week ending 29 May and the low of -61% in the week ending 10 April.

The services component (eating out) of food spending has continued to improve, with spending now higher than a year ago.

Spending on alcohol consumed at home (goods) continues to be growing at a decent pace compared with last year. Spending on alcohol consumed outside the home (services) has recovered slightly but remains well down from a year earlier. Restrictions on the number of people allowed at a venue, as well as lingering fears of catching the virus, could limit the upswing from here.

The resumption of almost normal school activities has seen spend on transport rise, although remains well down on last year and spend on medical care and health has also recovered.

Spending on household furnishings and equipment continues to remain at elevated levels.

The reopening of bricks and mortar stores has seen a transition from online spend to in-store spend. 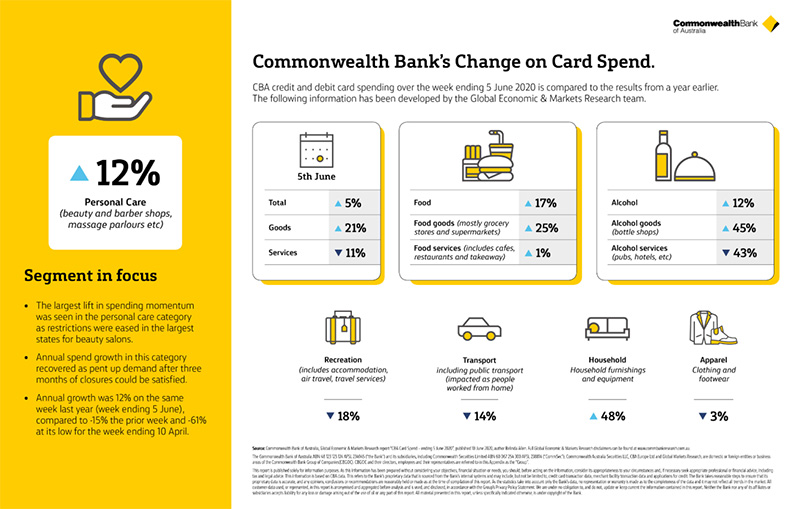 The JobKeeper package, currently supporting around 3.3 million workers, is currently under review. It is due to end in September. JobSeeker will also continue at its elevated state until September. It is currently supporting around 1.6 million Australians. The expected end, or perhaps tapering, of these programs, combined with the still fragile employment situation and lingering fear of the virus, could constrain an improvement in spending.

May employment numbers are due on 18 June. We expect employment to fall a further 100,000, the unemployment rate to rise to 7.7% and the participation rate to lift to 64% as people start to look for work as the worst of the pandemic is past.

CommBank weekly credit and debit card spend data gives you an up-to-date picture of what people are spending their money on and how this is changing as coronavirus continues to impact our world and the economy.

Note: Weekly CBA household credit & debit card spend data is derived from transaction authorisations to give a near real-time view. This means that cancelled authorisations, refunds, reversals, etc will not be included.  Data has not been adjusted for effects of consumers substituting between cash and card payments.

IMPORTANT INFORMATION AND DISCLAIMER This report provides general market-related information, and is not intended to be an investment research report. This report has been prepared without taking into account your objectives, financial situation (including the capacity to bear loss), knowledge, experience or needs. It is not to be construed as a solicitation or an offer to buy or sell any securities or financial instruments, or as a recommendation and/or investment advice. Before acting on the information in this report, you should consider the appropriateness and suitability of the information to your own objectives, financial situation and needs, and, if necessary seek appropriate professional or financial advice, including tax and legal advice. Commonwealth Bank of Australia (the “Bank”) believes that the information in this report is correct and any opinions, conclusions or recommendations are reasonably held or made, based on the information available at the time of its compilation, but no representation or warranty, either expressed or implied, is made or provided as to accuracy, reliability or completeness of any statement made in this report. Any opinions, conclusions or recommendations set forth in this report are subject to change without notice and may differ or be contrary to the opinions, conclusions or recommendations expressed elsewhere by the Bank or any member of the Commonwealth Bank of Australia group of companies. Any valuations, projections and forecasts contained are based on a number of assumptions and estimates and are subject to contingencies and uncertainties. Different assumptions and estimates could result in materially different results. The Bank does not represent or warrant that any of these valuations, projections or forecasts, or any of the underlying assumptions or estimates, will be met. Past performance is not a reliable indicator of future performance. Where ‘CBA data’ is cited, this refers to the Bank proprietary data that is sourced from the Bank’s internal systems and may include, but not be limited to, credit card transaction data, merchant facility transaction data and applications for credit. The Bank takes reasonable steps to ensure that its proprietary data used is accurate and any opinions, conclusions or recommendations are reasonably held or made as at the time of compilation of this report. As the statistics take into account only the Bank’s data, no representation or warranty is made as to the completeness of the data and it may not reflect all trends in the market. All customer data used, or represented, in this report is anonymised and aggregated before analysis and is used, and disclosed, in accordance with the Group’s Privacy Policy Statement. The CBA Spotlight Series does not contain any recommendations but provides commentary on Australian macroeconomic themes. As the CBA Spotlight reports are based on CBA Data, the IB&M Portfolio & Client Analytics (PCA) team provide raw data that may directly or indirectly relate to the themes that have been selected for coverage by the Chief Economist. The PCA team are subject to the same personal conflict requirements and trading restrictions as research, and individuals are wall-crossed per report. CBA Spotlight reports may be viewed in advance of publication by CBA Marketing and Communications in order to produce infographics. Reports are only provided to Marketing and Communications team members under strict wallcrossing and during this period their individual trading is monitored.