Total annual spending growth remains around 5%, although year-on-year in-store spending and spending on eating and drinking out firmed over the latest week.

In the week that ended Friday 11 September, spending on goods was up 17% from the same week last year, while spending on services was down 8%. We don’t expect services spending to recover until the shutdown measures in Victoria are withdrawn. Nevertheless, spending on eating and drinking out has firmed over the past week.

Total annual spending growth has been bouncing around 5% since late July. 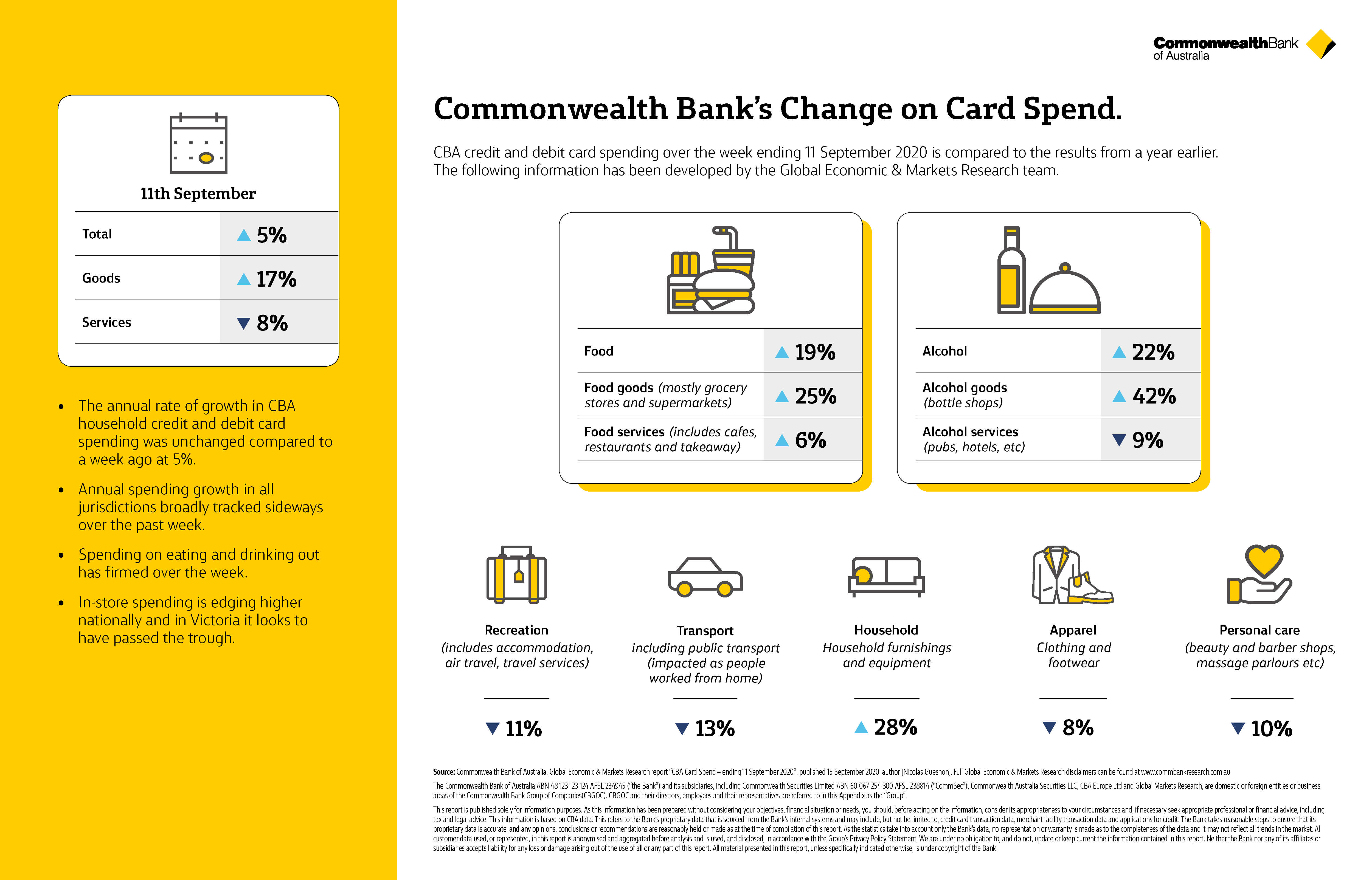 Household spending on debit and credit cards in-store recovered slightly over the week. In-store card spending in New South Wales has gained momentum and is now up 8% on last year’s levels. Growth in online spending eased but remains elevated.

Annual spending growth across the states has been broadly tracking sideways for the past month.

Western Australia and Queensland continue to outperform New South Wales, as well as Victoria, which is still lagging behind. We expect the divergence in spending outcomes, particularly in-store, to continue in coming months as restrictions are due to be eased only very gradually in Victoria.

South Australia and Tasmania are now marginally outperforming the Northern Territory and ACT.

Spending on recreation is down 11% from the same period last year. As this category includes accommodation and air travel, the soft result isn’t surprising. We expect strong spending in this category once state borders are reopened and international travel is allowed.

With the exception of Victoria, spending on medical care and health has been growing at a steady pace across the four largest states. However, spending in this category is still sharply down in Victoria as many medical services are only available for urgent cases.

Spending on transport is 13% down from the same period a year ago. This category is being affected by people working from home and avoiding public transport.

Household furnishings and equipment has so far been one of the components of consumer spending that has benefited most from changing spending habits due to COVID-19. Spending is up 28% from last year.

Other bright spots are food (up 19% from the same period a year ago) and alcohol (up 22%). There is a big split however between goods and services in these two categories. Spending on food goods, such as in supermarkets and grocery stores, is up 25% while spending on food services, like take-away, cafes and restaurants, is up a more modest 6%. The divergence is even greater between alcohol goods, such as in bottle shops, where spending is up 42% from last year while spending on alcohol services in venues such as pubs, clubs and hotels, is down 9%.

With more people working from home and less going out to eat and drink, spending on clothing and footwear is down 8% from last year’s levels and spending on personal care, including barbers and beauty shops, is down 10%.

CommBank’s weekly credit and debit card spend data gives you an up-to-date picture of what people are spending their money on and how this is changing as COVID-19 continues to impact our lives and the economy.

IMPORTANT INFORMATION This report provides general market-related information, and is not intended to be an investment research report. This report has been prepared without taking into account your objectives, financial situation (including the capacity to bear loss), knowledge, experience or needs. It is not to be construed as a solicitation or an offer to buy or sell any securities or financial instruments, or as a recommendation and/or investment advice. Before acting on the information in this report, you should consider the appropriateness and suitability of the information to your own objectives, financial situation and needs, and, if necessary seek appropriate professional or financial advice, including tax and legal advice. Commonwealth Bank of Australia (the “Bank”) believes that the information in this report is correct and any opinions, conclusions or recommendations are reasonably held or made, based on the information available at the time of its compilation, but no representation or warranty, either expressed or implied, is made or provided as to accuracy, reliability or completeness of any statement made in this report. Any opinions, conclusions or recommendations set forth in this report are subject to change without notice and may differ or be contrary to the opinions, conclusions or recommendations expressed elsewhere by the Bank or any member of the Commonwealth Bank of Australia group of companies. Any valuations, projections and forecasts contained are based on a number of assumptions and estimates and are subject to contingencies and uncertainties. Different assumptions and estimates could result in materially different results. The Bank does not represent or warrant that any of these valuations, projections or forecasts, or any of the underlying assumptions or estimates, will be met. Past performance is not a reliable indicator of future performance. Where ‘CBA data’ is cited, this refers to the Bank proprietary data that is sourced from the Bank’s internal systems and may include, but not be limited to, credit card transaction data, merchant facility transaction data and applications for credit. The Bank takes reasonable steps to ensure that its proprietary data used is accurate and any opinions, conclusions or recommendations are reasonably held or made as at the time of compilation of this report. As the statistics take into account only the Bank’s data, no representation or warranty is made as to the completeness of the data and it may not reflect all trends in the market. All customer data used, or represented, in this report is anonymised and aggregated before analysis and is used, and disclosed, in accordance with the Group’s Privacy Policy Statement.