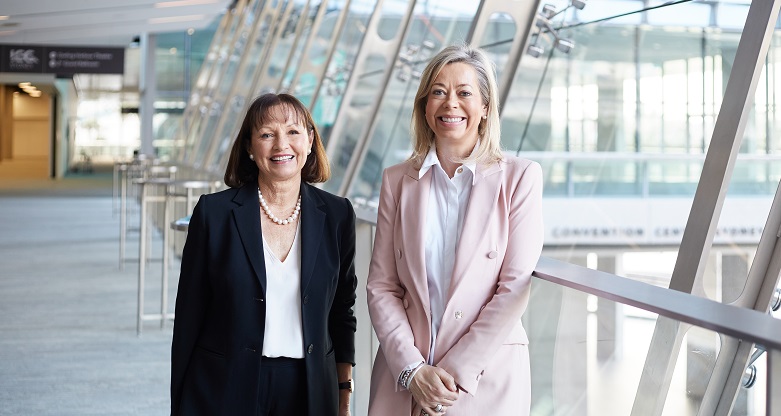 How delivering a message of hope can change lives

The founders of Stand Tall – a one-day TEDx-style event with a diverse range of speakers are determined to instil hope and impact youth mindsets for the better.

Some of the information below may be distressing. If you, or someone you know, needs support contact Lifeline on 13 11 14.

As mothers of high school students, Jeanine Treharne and Angela Farr-Jones were acutely aware of the levels of drug use, depression, bullying, hopelessness, and self-harm among Australian teens. For Jeanine and Angela, it was clear conventional ways of getting through to students weren’t working.

In 2012, they set out to find a new way of reaching students, founding Stand Tall – a one-day TEDx-style event with a diverse range of speakers, designed to instil hope and change youth mindsets for the better. Stand Tall ran its first event in 2013 to an audience of 1,100 students in Sydney and has grown from there, gaining a national audience. Recent events have been opened by Federal and State ministers, including the Prime Minister and NSW Premier and has become the largest event of its kind in the country.

As Stand Tall has expanded, so too have Jeanine’s and Angela’s leadership skills. Scaling up operationally, developing networks and influencing public, private and not-for-profit sector leaders, and thinking deeply about how to engage their audience, has become an increasing focus.

But for Jeanine and Angela, it’s all about the students themselves and creating an experience that will make a genuine difference.

“By taking students out of the classroom and into an environment where they can have fun, -[it] means they are more likely to take notice of the powerful messages from our speakers and entertainers that can change their lives,” Jeanine says

“We have done 10 events and have grown exponentially,” Angela says. “This year, we hosted 5,500 students and teachers with more than 110,000 people participating in the event online across Australia.”

Delivering an experience that gets cut-through

Like any truly customer-centric organisation, Stand Tall puts its students and the communities it serve first. As leaders, Jeanine and Angela have focused their efforts on delivering experiences for students that can change their perspectives and drive advocacy. But, as many leaders would know, creating the right environment to affect change is crucial.

For Stand Tall, the stakes are high. Angela recalls a 2019 Gallup Poll that found only 42% of Australian youths had hope for the future. She says that tragic figure illuminates Stand Tall’s focus and philosophy as an organisation. “Despite all the opportunities that are available, the pressures can be so great that often students just can’t see beyond them,” Angela says.

Stand Tall has run post-event surveys where 80% of students have said the experience has dramatically increased their levels of hope, and 93% were positively impacted by the speakers’ messages. For Angela and Jeanine, the secret to engaging this hard-to-reach group is delivering a truly outstanding experience.

“If you put on the best show that students have ever been to, where the lighting, sound, singers, dancers and speakers are all truly first class, you have the best chance of engaging them,” Jeanine says.

“It sends a message that we care enough to provide an incredible experience and the students sense that with anticipation and excitement even building before the event. We are so thrilled by the giant smiles on everyone’s faces.”

A memorable line from one of the Stand Tall speakers that runs a charity in Haiti is, “some people in the world would give anything for your bad day,” and Jeanine says that having a forum to share stories is a powerful way to provide perspective.

“Students leave our event with a sense of how lucky they are to live in Australia, and the problems that seemed big before often dissipate,” Jeanine says.

This is one example of how Jeanine and Angela use storytelling as a tool to legitimise ideas and influence the audience in an emotive way. Angela says that particularly around issues that are ordinarily more sensitive or difficult to broach, it can be an effective platform to inspire.

“I think there is something very special about listening to someone’s personal story, and we all respond better to that rather than being told what to do,” Angela says. “Whether they relate to overcoming hardship or setting incredible goals and achieving them, the stories of our speakers inspire the audience.”

“They call suicide a permanent solution to a temporary problem, and the students don’t have the life experience to know it will get better. So, we bring in speakers that are just a bit older than them to show them first-hand that it can, and that’s a powerful way to get them to see beyond their current circumstances.”

Harnessing the power of networks

Both Jeanine and Angela say that the success of Stand Tall wouldn’t be possible without everyone coming together to support the important cause. Their small but passionate team is at the centre, coordinating a range of supporters and stakeholders.

As founders and leaders, they have both spent considerable time developing these networks, speaking to schools, charities, government representatives, corporates, to unify them behind the cause. The ability to coordinate these efforts has been crucial to the organisation’s growth.

“We rely on 250 volunteers and are grateful for the support from a number of corporates, have built a beautiful relationship with the International Convention Centre (ICC), and work with a range of for-purpose organisations focused on improving the lives of young people,” Jeanine says.

Angela adds that Stand Tall “has built a wonderful connection with the Minister for Education, and the Department now helps promote the live and online event. NSW State and Federal Ministers provided a recorded message for our latest event, and we worked with the other state education departments to get the details of our live stream out to students.”

Looking to a brighter future

In 2022, Angela and Jeanine are turning their attention to growing their reach and delivering a reinvigorated message of hope. They will continue to run a hybrid event format and travel to Tamworth, Dubbo, and Cobargo as part of the Government’s mental health roadmap for regional NSW.

Angela says that Stand Tall’s theme for next year is ‘dream again’ “which we think is really exciting because a lot of people have put their dreams on hold amid the pandemic. So, we want everyone to start to think about a brighter future and start setting goals again.”

Again, Angela and Jeanine are looking to storytelling and strong thematics to get their message across and engage their audience. For leaders in business who are keen to send a similar message to their teams as we emerge from the pandemic, it’s worth considering how important communication, influence and empathy can be in these settings.