During the past month, the economic impact and restrictions in place as a result of COVID-19 has started to take its toll on the residential property market. Not so much in the established owner occupier segment with limited stock providing some support to prices, but more so in the rental segment where vacancy rates are now on the rise.

Data from SQM Research shows the Australian residential vacancy rate rose from 2.0% in March to 2.6% in April 2020. Given current conditions, it’s not surprising vacancy rates rose in April, but the extent in which they rose in some markets highlights how quickly the demand supply ratio for rental accommodation can become out of balance. 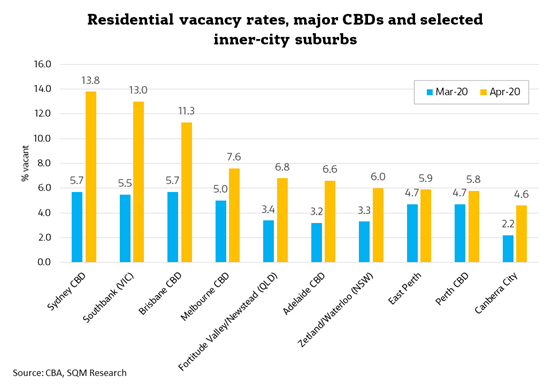 These inner city areas have experienced weakened demand and higher supply at the same time. Demand has been weaker as these areas tend to be where casual employees and offshore students live, two groups that have been clearly impacted by the current economic downturn with higher unemployment rates. As a result, many are likely returning home and giving up their rental accommodation.

On the supply side, inner city locations tend to have a higher proportion of short-term rental accommodation, such as Airbnb, which is now being put back into the long-term rental market for lease.

But there have been pockets of resilience with some suburban locations less impacted by these factors, experiencing fairly flat to moderate declines in residential vacancy. Kew East, 10 kilometres east of the Melbourne CBD, continues to maintain a very low vacancy at 1.2%, up just 20 basis points in April. Vacancy in Campbelltown, in Sydney’s west, remained low and steady at 1.9%. Also in Sydney, Lakemba (south west) and Fairfield (west), both recorded 20 basis point declines over the month to record vacancy rates of 3.6% and 2.3% respectively.

In total, the impact has resulted in increased vacancy rates at a metropolitan level. For the major capital cities, Sydney has moved above the 3.0% equilibrium rate (the point at which rents are stable), while others, especially Melbourne and Brisbane, are approaching this level. Sydney recorded the largest rise, from 2.9% to 3.9% in April, followed closely by Melbourne up 90 basis points to 2.8%. Canberra and Adelaide remain the capital cities with the tightest tenancy market, both rising 30 basis points to record the same vacancy rate level of a much lower 1.2%.

Until the employment market shows improvement, further weakness is expected with vacancy rising more in some locations. The impact will also be felt further on rent levels. But as seen in April, some locations will fare much better than others.