Why businesses are looking towards an electric vehicle future

Australian businesses have been slow to embrace the use of electric vehicles. But, as availability increases, prices drop, and people become better informed about the benefits, this could be set to change.

While the use of electric vehicles (EVs) in Australia is currently quite low, new research from CommBank suggests that businesses are considering a more sustainable and energy-efficient future. Almost a quarter of the 900+ decision-makers who were surveyed say they are intending to evaluate their stance on transitioning to EVs over the next 24 months. The research – conducted by ACA Research for CommBank – reveals that 23% are currently considering the use of battery EVs and 24% the use of hybrid EVs within the next two years.

Of those surveyed, only a small percentage currently own or lease battery EVs (4%) or hybrid EVs (8%). A VFACTS update from January reporting on retail car sales in Australia supports the finding that EV uptake remains relatively low Battery EVs represented just 0.2% of the new-car market in 2020¹ (although this excludes Tesla, which withholds its sales data in Australia).

However, there was a dramatic surge in hybrid models purchased last year across the country – an increase of 93.7% compared to 2019. This rise was largely due to long waiting lists for Toyota vehicles – the brand driving the wave. More than a quarter (26.5%) of all Toyotas sold in Australia last year were hybrid, and those hybrid models made up 85% of all EV types that were sold.

While the hybrid EVs are clearly gaining traction, there’s still a long way to go. The story is similar in the US where EV sales fell by 12% in 2019, after an 80% surge in 2018 when the Tesla Model 3 launched.² European countries appear to be the ones to watch, making up nine of the top 10 global markets for EV penetration in 2020.³

What’s been holding businesses back?

Price, uncertainty over fitness for purpose, and lack of government regulation are three key reasons behind the low uptake of EVs by businesses in Australia. Different industries have different concerns, but the CommBank research reveals that the high cost is a significant inhibitor for everyone. More than a third (38%) of businesses said a lower purchase price would encourage them to transition to EVs right now, while 51% said it would motivate them to evaluate a transition over the next 24 months. Other factors that would accelerate a switch to EVs include more public charging infrastructure (30%) and government rebates (28%). This was followed by greater choice of fit for purpose EVs and better information on the cost and efficiency benefits that come with making the switch.

For businesses in heavy industries like construction, decision-makers believe there isn’t enough choice in the vehicle categories they require. They also believe that the quality and power of EVs just isn’t the same as the diesel or petrol-fuelled vehicles they use. For lighter industry sectors such as health and education, services, and retail and hospitality, the interest in and uptake of EVs is higher. This could be contributed to the fact that the vehicles these industries require are smaller and used for less demanding work. According to the Electric Vehicle Council, there are 26 models of EVs currently available in the Australian market from some of the world’s biggest carmakers like Toyota, Mercedes, Mitsubishi and Nissan. While more options are expected to be released in the near future, the number of vehicles that fall into the heavy vehicle category remains very limited. 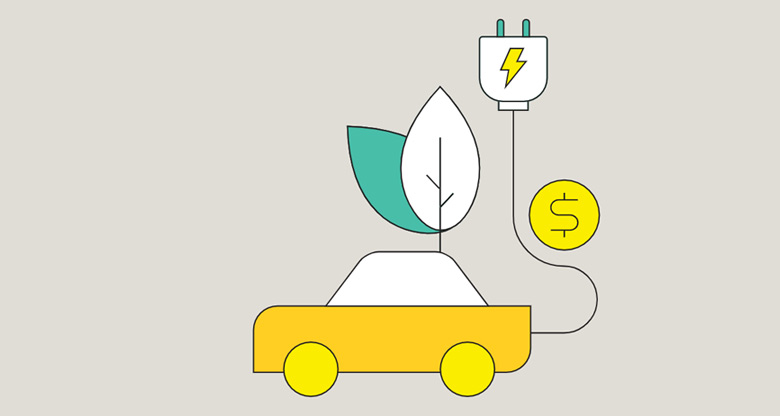 Why make the switch?

For those businesses considering switching to EVs, there are several considerations at play. First is the long-term cost benefit, which is a particularly attractive proposition. The Electric Vehicle Council says running a car on fuel costs approximately $1.50 per litre, whereas an EV is $0.33 per elitre. Then there are the lower maintenance costs, and the environmental benefits such as reduced carbon emissions. ‘Range anxiety’ used to be a major concern but that myth has been debunked – new models can drive for almost 550 kilometres on a single charge. The research suggests that government incentives would likely accelerate adoption further. Some industry bodies are taking the lead, such as the National Farmers Federation which has pledged support for government reform while rolling out its own initiatives in the agricultural space.

The Electric Vehicle Council says there are more than 2,000 public charging stations around Australia, but only 350 of these are fast and ultra-fast charging stations. If the adoption of EVs accelerates among individuals and businesses, it’s likely this will be insufficient to meet future demand.

Some decision-makers, particularly in the distribution industry, say that this lack of infrastructure is a major deterrent to switching to EVs. Almost a third (29%) say more public charging infrastructure would encourage them to invest in EVs. So, what’s the solution? Setting up chargers in the home or workplace, especially ones powered by solar, is one option. While it’s a large initial investment, it has the potential to bring dramatic cost benefits in the long term. Funding a transition to EVs could involve a large initial outlay to purchase the vehicles and charging infrastructure, but the long-term maintenance costs are relatively low compared to combustion engines. CommBank also offers several initiatives to help both consumers and businesses fund energy efficient equipment. Specifically, CommBank’s business orientated Energy Efficient Equipment Finance package* provides a rate discount when businesses choose to purchase qualifying efficient models and the Green loan** available on eligible home loans provides a low rate to fund solar battery packs and electric vehicle chargers.

The CommBank survey statistics used in this article are based on a survey of 911 business decision-makers, conducted by ACA Research for CommBank between 25 November to 17 December 2020, entitled Equip: Issue 13 Asset Finance Thought Leadership Research. All statistics used are from this research unless otherwise stated.

* Credit provided by the Commonwealth Bank of Australia. Asset Finance products are only available to approved business customers and for business purposes. Applications for finance are subject to the Bank’s eligibility, suitability criteria and normal credit approval processes. You should view our current Terms and Conditions for Asset Finance at www.commbank.com.au/aftandcs.

** Green loan information is available at www.commbank.com.au/home-loans/commbank-green-loan. This information has been provided without considering your individual objectives, financial situation or needs. Before making any decisions, you should consider its appropriateness to your circumstances and consider obtaining professional advice. Rates are subject to change. Fees, charges and Terms & Conditions apply. We reserve the right to modify or terminate the Green Loan initiative scheme or withdraw this invitation at any time.