Trends in overseas markets suggest that companies are committed to a return to office in 2022.

A year ago, life was getting back to some normality for Australian office workers with many spending time in the office again. Those markets least impacted by lockdowns – Brisbane, Adelaide and Perth - were experiencing occupancy rates in the sixty percent range at the start of 2021, and this level has been broadly maintained or even increased in these cities through 2021.

But the Delta strain of COVID-19 put the brakes on the largest office markets of Melbourne CBD, Sydney CBD as well as Canberra, where occupancy was recorded as low as 6%, 4% and 8% (PCA) respectively at September 2021.

What can we learn from the situation overseas, where many countries are already grappling with the challenge of living with COVID-19, outside of lockdown?

In the US, the pattern of return to the office was a gradual one, but over the last few months the spread of the Delta strain and rising case numbers has slowed the trend. Concerns around using public transport to commute to work in cities like New York is partly behind the hesitation.

The top office occupiers in the US, all tech companies including Amazon Inc. and Apple Inc., have said they will delay a return to the office until 2022 and implement a permanent hybrid working arrangement, which will be very much tailored to each business. Many tech companies feel a return to the office is necessary to encourage collaboration and knowledge transfer, which are at the heart of the software development process.

Even workers from Zoom, the San Jose, California-based company responsible for the remote video-conferencing software, made famous during the pandemic, want to get back in the office.

Further evidence of the commitment to return to the office, was Google reportedly buying a Manhattan office building in September for US$2.1 billion, the highest price paid for an office building in the US since the pandemic began. Owner occupation in the office sector is rare in Australia, but surplus cash reserves held by the massive US Tech companies is often used to invest in their own business premises – Amazon and Facebook recently did the same thing.

In the UK, office occupancy remains constrained but showed improvement in September. Figures released in late September by Remit Consulting highlight levels across the UK increased to an average of 18.3% boosted by central London and in the West End were occupancy reached an average of 33.4%.

Interestingly the results also showed Tuesday, Wednesday and Thursday are the busiest days. Hybrid working looks set to become a more entrenched part of global office space use across a broader range of industries and locations, at least for the short term.

With office vacancy elevated in all major global office markets, tenants are committing to new leases in higher quality space with the help of either lower rents or higher owner incentives. Sustainability is also ramping up as an increasing demand from corporate occupiers.

In Australia, Q3 2021 office market data reveals the amount of leased office space starting to rise once more, with an extra 195,000 square metres leased. The amount of office space leased in Australia is still well down on pre-COVID levels, but it is definitely increasing. 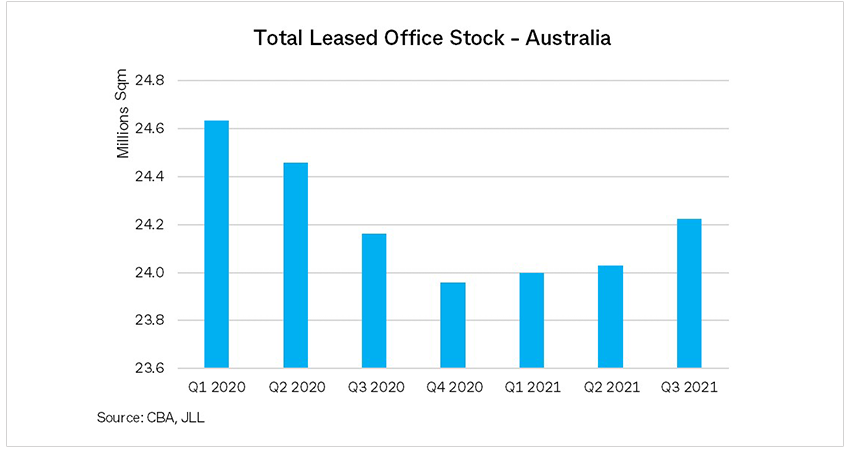 It appears in Australia and globally the commitment is being made to get back into the office, but not until 2022. Starting from a high vacancy position, the recovery in the popular asset class is likely to be prolonged, at least 3 and as long as 5 years depending on the market, to return to pre-COVID levels of occupied leased space and vacancy.