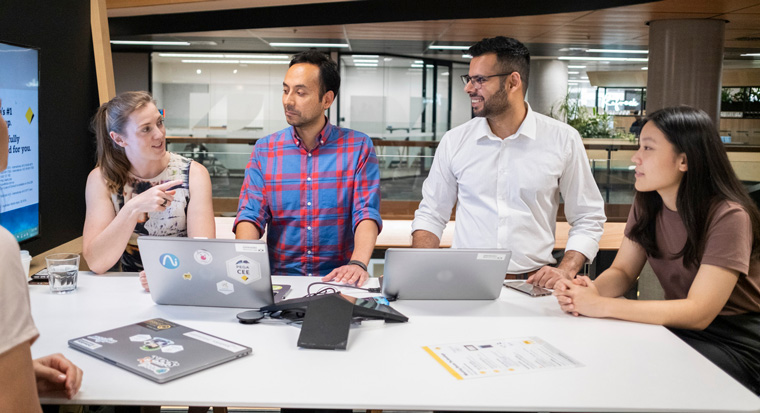 “Last year we introduced Career Pathways, a model that acknowledges the value each individual contributes and puts career development in the hands of the engineers themselves," says Rob Reakes, Head of Systems Engineering at CommBank.

Career Pathways has redefined roles and expectations across Systems Engineering, while allowing every team member to take control of their own career progression. It's a key component of the technology division’s broader investment in their people, through their Academy for Career Excellence.

Rob is one of the driving forces behind Career Pathways. With the program initially established in Systems Engineering, plans are afoot to roll it out across CommBank’s wider engineering community.

“To kick off the program, we conducted HR competency mapping for each role. Then we benchmarked against the industry best, before broadening to account for the breadth of CommBank’s engineering function. This included aligning Systems Engineering with the other disciplines of Data and Software. And in doing this, the ability to move across roles became real.

“We now have a simple, consistent levelling of roles that make different pathways visible, so our engineers can move across teams with ease.”

Our results show that within Systems Engineering alone, the model has consolidated our role titles to fewer than 10. We've also seen several successful role rotations rolled out in the first six months, and with the introduction of new gamified upskilling, learning completion rates have more than doubled; that’s Engineers volunteering to upskill other Engineers.

We’ve also seen the positive impact of a new mentoring system and a 360-degree feedback loop.

Underpinning the model is a clearly defined role structure that maps expectations and role requirements against levels of seniority. Engineers can now clearly see what is expected of them in their role, what they need to focus on in order to take the next step in their career, and how they would fit in another team if they decided to expand their skill set.

“Before Career Pathways there were a number of different role titles, and sometimes it wasn't until the third conversation with someone that you really understood what they actually did,” says Rob.

“With this clear pathway, you can look to those holding senior positons as role models and emulate the technical and personal skills.”

As engineers move up levels of seniority, their additional responsibilities and expected skill sets are tangible and defined. These include hard technical skills such as domain expertise, through to softer leadership and personal skills like sphere of influence and the ability to communicate ideas.

One immediate benefit of this simplified role structure being implemented across each engineering discipline, is the ability engineers will have to move across the enormous breadth of CommBank’s technical stack.

“Mobility is much more accessible once a common career model is implemented across the teams. If you’re senior here, you’re senior there,” says Rob.

While this is attractive for many, the Career Pathways model also accounts for those who prefer to focus on becoming a specialist in their chosen field.

“It’s designed so that towards the top of our Career Pathways, we level-set the roles of Staff Engineer and Specialist Engineer. Where Staff Engineers are quite broad in their technical skills, a Specialist goes narrow and deep. In the new model we acknowledge the value of our specialists, and while we encourage rotation, it’s not forced.”

A better structure for promotions & feedback

The Career Pathways model has also reviewed the promotion process. Engineers can trigger the process of moving into a senior position by nominating themselves for a role and self-assessing their expertise across each of the target role’s requirements. A process of leader sponsorship, review panel endorsement and business approval is then executed.

“We use a blind assessment technique to remove bias from the process,” says Rob. “Where someone is unsuccessful, we implement a concrete development plan, carefully balancing expectation and opportunity.”

It’s here that the model’s new 360-degree feedback loop, and a unique approach to mentoring, take career development to the next level. Engineers receive ongoing and direct feedback from their peers, which has become an organic part of how squads work and feedback is captured at the end of each fortnightly sprint. Line managers then coach team members to support putting their feedback into action.

“We've found that most feedback is coming not from the leader, but from those they interact with. When people move across squads, they get a lot of different feedback, building a rich view of how they work.”

From this, a technical mentoring program has naturally emerged, fostering a more organic approach to how junior and senior engineers connect.

“When you set the expectation that a Staff Engineer is expected to role model positive behaviours broadly across multiple squads, that sets an expectation of mentoring. For less experienced engineers, having mentoring occur organically and in different forms allows them to easily ask for and access this.”

Career Pathways has opened the door for engineers looking to broaden their horizons and tap into the wealth of knowledge and opportunities CommBank has to offer.

“We’ve got a lot of different technologies and lots of complexity. Our challenge is to simplify that and support people to build and excel in their careers.”