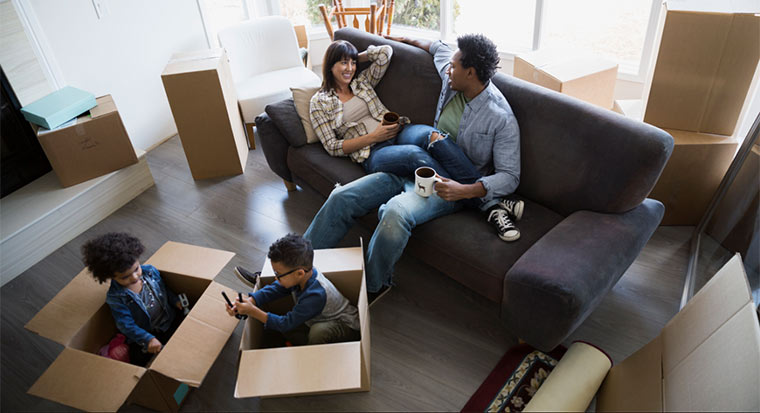 After the birth of their second child, Alex and Michelle wanted to make sure they could protect the future of their young family.

This is a fictional scenario, created to illustrate the potential benefits of taking out life insurance.

Alex and Michelle work hard to create a happy and loving home for their young family. Just before the welcoming of their second child Jack, they purchased a home near a quality childcare centre and school for their children to attend. They opened a savings account and regularly put aside money for their children’s education.

Alex and Michelle are both excited about their growing family and the dreams they have for Jack and their daughter Chloe. But lately, Alex has had some sleepless nights. Since Jack was born, he’s now become the family’s main income earner, while Michelle takes some time off work to be a full-time mum. So he’s worried how the family would manage if something happened to him.

When Alex was 12, his own father had passed away suddenly. Losing him was a devastating blow to his close-knit family. What’s more, Alex’s father didn’t have any plans in place when he died, which made it even more difficult for Alex and his mother to adjust to life as a family of two.

Determined to keep his own young family from going through the same hardships, Alex talked to Michelle about reviewing their life insurance needs. Together, they decided to look at their current circumstances and discussed their future dreams to work out what cover they would need if something happened to one of them.

Working out their family’s future needs

Together the couple factored in the costs of their mortgage payments, childcare fees and future education costs. And they looked at how much it would cost to take care of their young children and home if something were to happen to Michelle, so that Alex could continue to work. They then looked at their current savings, other assets and the small amount of insurance cover that they each already had in their super fund. They also included in their calculations the leave they would receive from their employer if they had to take time out of work for illness, injury or bereavement leave.

Once they had this information, they were able to work out the financial gap they would need to fill if something happened to either of them. This way, Alex and Michelle were then able to make an informed choice about the amount of cover that they would need to protect their young family.

When they looked at their situation, they thought it would be wise if they each took out life insurance cover, which would pay out a lump sum if one of them passed away or became terminally ill. The cover would protect their living expenses, including their mortgage – and cover the cost of childcare and taking care of their home if one of them was no longer here. They could also choose to take out Total and Permanent Disablement (TPD) cover, which would help cover their financial gap if an accident or illness left either of them permanently disabled.

If they both took out cover, some insurers offer partner discounts on their policies – which would make their premiums more affordable.

With the right amount and type of life insurance in place, Alex and Michelle could feel more confident about their family’s future. They would do the right thing by each other and their children by having contingency plans in place – so they could focus on enjoying family life today.

You should, before acting on this, consider the appropriateness to your circumstances and read the relevant Product Disclosure Statement (PDS) available at commbank.com.au or by calling AIA Australia on 1800 491 588, 9am to 5pm, Monday to Friday (Sydney time), before deciding to acquire or continue to hold any of these products. Neither CBA nor any of its related corporations are authorised representatives or authorised representatives of AIA or our related companies. For more information on the financial services CBA provides, you should read CBA’s Financial Services Guide and Privacy Policy on commbank.com.au. If you purchase a Life Insurance and/or Income Protection policy, CBA is paid a commission which is a percentage of your premium.