Tasmania and Victoria lead the nation: CommSec State of the States

Tasmania and Victoria lead the nation: CommSec State of the States 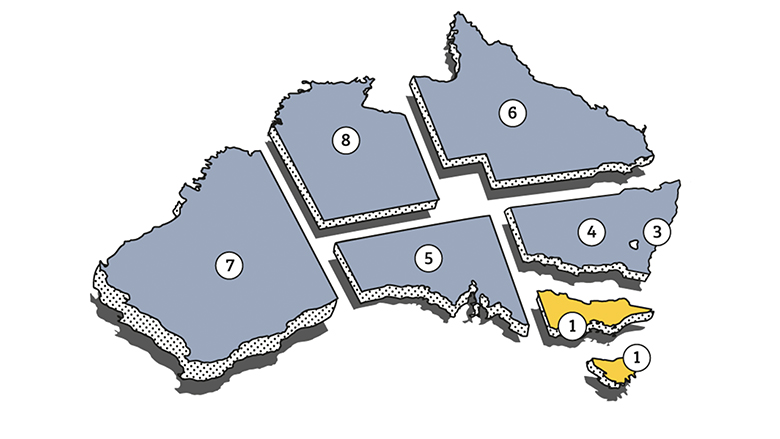 The latest CommSec economic rankings reveal how the state and territory economies were positioned heading into the coronavirus pandemic.

Victoria remains Australia’s strongest performing economy, but it now shares top spot with Tasmania, according to the latest CommSec State of the States report. Using the latest available information, the report provides a valuable snapshot of the nation in the lead up to the coronavirus crisis.

Now in its 11th year, the State of the States report has seen Victoria hold the top position for eight quarterly surveys, with its latest strong performance driven by economic growth, retail spending and construction work.

Tasmania’s economic performance ranking hasn’t been this strong since October 2009. The Apple Isle now shares top spot in the rankings, primarily due to above-‘normal’ growth in population (faster than the decade average) and subsequent strong demand for new homes.

The ACT has overtaken NSW into third position with its highest ranking in over a year, leading the way on relative unemployment, housing finance and equipment investment. NSW has slipped to fourth place, with South Australia and Queensland sitting in fifth and sixth position respectively. Western Australia remains in seventh position, ahead of Northern Territory.

CommSec Chief Economist Craig James said: “While we’ve seen movement at the top of the rankings, there is actually little separating the top four economies. Overall, some of the biggest improvements over the past quarter have come from South Australia, Western Australia and Northern Territory as these economies start to close the gap between those leading the rankings.”

The latest State of the States report uses the most up-to-date economic data, however it reflects conditions before the impact of the coronavirus had been felt by many Australian businesses and households.

“Regardless of the rankings, the impact of the coronavirus is posing significant challenges across all states and territories, especially those reliant on overseas tourism and overseas students. While each state and territory has its unique pressures, we really are all in this together.

“Future reports will prove valuable as we track how each state and territory is navigating through the crisis and into an eventual recovery phase. For example if we look ahead, recovery of the Chinese economy may boost prospects for resource economies like Western Australia, Northern Territory and Queensland. Also the relaxing of social distancing restrictions and bringing forward of infrastructure projects may serve to boost recovery prospects of state and territory economies more generally,” Mr James said.

To access the full State of the States Report for April 2020, including the detailed breakdown of each economic indicator and additional commentary from CommSec’s Chief Economist, Craig James, visit www.commsec.com.au/stateofthestates