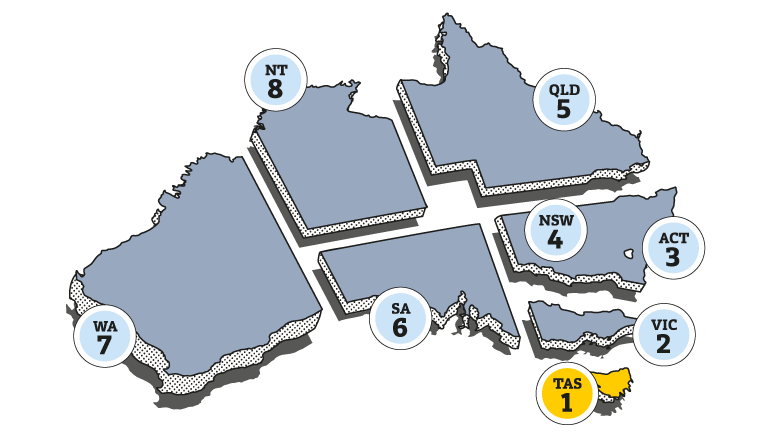 Tasmania leads the nation: CommSec State of the States

The latest CommSec economic rankings reveal how the state and territory economies have handled the early stages of the coronavirus pandemic.

Tasmania is now Australia’s best performing economy according to the latest CommSec State of the States report. In the previous survey three months ago, Tasmania shared top spot with Victoria and now holds the mantle of top performing economy in its own right.

Using the latest available information, the CommSec State of the States report provides a valuable economic snapshot of the nation in the early stages of the coronavirus crisis.

Now in its 11th year, the State of the States report has seen Tasmania take top position in the economic rankings in its own right for the first time since October 2009. The Apple Isle is now leading the rankings, primarily due to above-‘normal’ growth in population (that is, faster than the decade average) and subsequent strong demand for new homes as well as an improved relative performance of the job market and consumer spending.

CommSec Chief Economist Craig James said: “One of the trends we have seen is some compression in the rankings. For instance NSW and the ACT have lost ground to other economies on some indicators while Queensland and Western Australia have seen relative improvement in their economies.

“While Victoria has slipped to second position in the rankings, this is largely due to Tasmania forging ahead on a number of indicators. Victoria has generally held steady, however there are now greater risks for the Victorian economy given the second wave of coronavirus and a return to more stringent lockdown that has occurred in recent weeks.

The latest State of the States report uses the most up-to-date economic data. However while some data relates to the March quarter, other data – such as unemployment – is timelier, covering the month of June.

“The coronavirus crisis is posing significant challenges across all states and territories. Some have been more successful in suppressing coronavirus cases and that may lead to relative out-performance on economic indicators in future months. Each state and territory has its unique pressures, for example domestic tourism will impact the states differently. However the coronavirus pandemic has demonstrated how we’re all interconnected. We really are all in this together.

“Future reports will prove valuable as we track how each state and territory navigates the crisis, especially the recovery phase. Infrastructure spending will be vital in generating economic momentum. Further, the performance of the Chinese economy will be important in driving resource and engineering sectors,” Mr James said.

To access the full State of the States Report for July 2020, including the detailed breakdown of each economic indicator and additional commentary from CommSec’s Chief Economist, Craig James, visit www.commsec.com.au/stateofstates