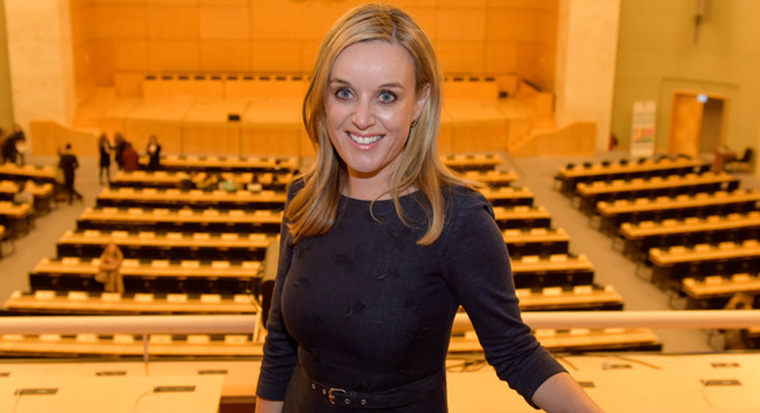 Trailblazing ethics strategist Clare Payne reflects on the meaning of endurance and why it’s an essential trait for women leaders today.

Ask Clare Payne what makes a great leader and she’ll tell you, it comes down to more than just raw talent. As a trailblazing ethics strategist and and author of A Matter of Trust - The Practice of Ethics in Finance, the EY Fellow for Trust and Ethics believes endurance is the quality that sets the world’s change makers apart, the key to making a lasting impact.

For Clare, endurance in business often means persisting with projects for months or years at a time, in order to create positive change. Here, she shares with Women in Focus about why it’s worth enduring, and how her passion for ethics motivates her to continue reaching for her goals.

Originally a lawyer, Clare transitioned to the world of investment banking and then ethics. She’s been championing ethics in the financial sector ever since and believes endurance is the key to ethical leadership. “I feel that in some ways, endurance and things that take a lot of time are out of fashion,” she says. “But in business, we have an opportunity to help create a good society and to do that we will need endurance, because some good things will take time,” she says.

As a teacher at university, Clare is doing her best to advocate for endurance in the next wave of business leaders. “In my business students, I often see this real desire to be the next big thing, to create a unicorn startup or to become a billionaire overnight, and I’m not saying that’s not great,” she says. “But people often have to work very hard, for a long time, to achieve something in their lifetime or contribute to something that will create positive change in the future.”

The pioneers that propel us forward

When she reflects on what it really means to endure, Clare is inspired by those who have paved the way before her. “Historically, when we’ve moved forward as people, it’s because we’ve had to stick at something and persevere, and along the way, accept failure and be able to get back up,” she says. The ethicist considers pioneering early explorer Ernst Shackleton to be an icon of endurance – but his is just one of many great feats of humanity. “Take the great advances we’ve had in medicine, for example vaccines,” Clare says. “They exist because of the contribution of so many people over time, so many doctors and scientists that have worked to continue to advance us.”

Fast-forward to now, and this spirit of endurance continues to propel our society towards positive social change. “You only have to think about same sex marriage, which took 22 attempts in this country,” Clare says.

In the current climate of gender inequality in business, Clare believes that endurance will be particularly critical to the success of aspiring women leaders. “As women, I think we need endurance to be heard, to get funding, to get voted into positions in business,” she says.

Unfortunately, women face unique challenges when it comes to receiving due recognition for their endurance feats – both in and outside of the world of businesses. As an accomplished long distance ocean swimmer, Clare laments the lack of recognition of extraordinary women in her sport. “The interesting thing about women and endurance is that we’re often still not properly recognised as endurance athletes, as having this capability,” she says. “Even now, there isn’t a 1500 m swim event in the Olympics for women, but there is for men… and yet we hold records over men in extreme endurance swimming.” It’s a case of, ‘we can’t be what we can’t see’ – and a call to recognise the achievements of women more broadly.

Ethics and endurance in leadership

Working in the finance sector, Clare has seen some remarkable feats of endurance come to fruition – albeit slowly. “It’s taken decades for the finance sector to really recognise climate change and invest… and it’s taken a long time for financial markets to talk about sustainability,” she says. “Thank goodness people endured along the way, and have been championing this stuff for decades, because now we’re starting to see some positive movement.”

In her role as an ethics advisor, the change advocate has had to draw on her own endurance in order to effect positive change in the long term. “When I came from law into finance, I really felt like there was a sort of base standard that was missing, so I created The Banking and Finance Oath (BFO) – a Hippocratic oath for the finance sector,” she shares. “I worked on that for more than 10 years to get people to sign up, because I believed it was something that was needed.” Tobacco-free investment has been another long-term focus, advocating for tobacco control both in Australia and overseas at the UN.

Ultimately for Clare, endurance has been about focusing on the things she is passionate about, working through the challenges that have come her way in order to realise her goals. “Ethics is an endurance event – one I think we should all participate in, even though we may never get to the end,” she says.

When an unexpected event hits your business

Things you should know: This information is intended to provide general information of an educational nature only. As this information has been prepared without considering your objectives, financial situation or needs, you should, before acting on this information, consider its appropriateness to your circumstances. Any opinions, views of contributors, conclusions or recommendations are reasonably held or made, based on the information available of compilation, but no representation or warranty, either expressed or implied, is made or provided as to the accuracy, reliability or completeness of any statement made in this information. If you have a complaint in respect of this information, the Commonwealth Bank’s dispute resolution service can be accessed on 13 22 21. Commonwealth Bank of Australia ABN 48 123 123 124 AFSL and Australian credit licence 234945.