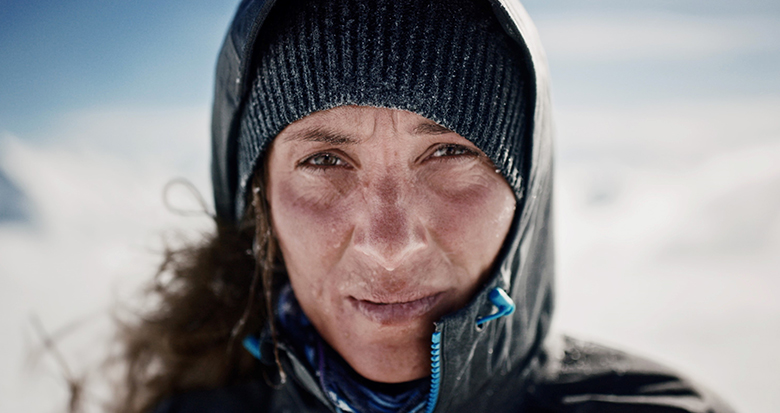 We talk to photographer Krystle Wright about how she turned her passion for capturing unique perspectives into a thriving career as an adventure photographer.

Adventure photographer and film director, Krystle Wright, spends her time differently to most people. Whether she is camping on a frozen fjord for a month in the Arctic or sleeping on the back of a yacht on the Great Barrier Reef, Krystle is not only intent on finding new ways to look at the world but says it’s a defining feature of her work.

“When it comes to photography, or generally being creative, it is vital to find new perspectives. In my field, if you are simply bringing the camera to eye level and viewing the world the same way, it gets very bland very quickly. You miss out on so much,” Krystle says.

“Particularly with prolific use of social media, we have a market that is flooded with photography. However, I certainly don’t think photography has lost its power as a result. If anything, as a professional, it’s a greater challenge to stand out and find unique perspectives.”

The pursuit of unique perspectives has underpinned Krystle’s distinguished career and seen her recognised as one of Australia’s most prominent adventure photographers. Today, aside from working with a range of clients, she travels the world as an ambassador for Canon and her work has appeared in publications such as National Geographic, The Red Bulletin, Outside and The Times, in addition to featuring in film festivals around the world.

According to Krystle, this success can be attributed to both her “insatiable desire to explore with a camera in hand” and living and breathing her lifestyle as an adventure photographer.

According to Krystle, reaching the apex of her field and growing her profile as a photographer is a testament to an unwavering commitment to her ability, creative potential and passion.

“Initially I worked as a photographer for the newspapers, and when I moved into adventure photography I had to start from scratch,” Krystle says. “No one knew me, but I backed myself financially, saved the money and just did it.”

“I have made a career out of passion projects, but I didn’t wait for anyone to come knocking on my door to present a great opportunity to me. That, of course, happened later in my career.”

“Instead, my approach has been to design ideas and concepts to meet client demand for incredible stories, and then proactively go out and present those ideas.”

“Sometimes the gamble didn’t pay off, and I would find a way to start again. But then suddenly clients started to notice the work I was producing and would say ‘we love that concept’ or ask how I could make that idea work for them.”

“I only ever have a plan A”

From starting her career working with the newspapers, Krystle moved into photography for magazines such as National Geographic and today works on photography and video projects including short films. When talking to younger aspiring creatives in her field, she is reminded that although her career transition may appear seamless from the outside, that it was far from easy.

“I can tell you it’s been a roller coaster ride,” Krystle says. “Now I am busy, and I am travelling the world, and it’s phenomenal – but it hasn’t always been like this,” adding that persistence and an innate ambition has aided her success.

“Particularly in photography, it’s very lonely, so when things go wrong and common sense is begging the question of whether a project will work out in the long run, my stubborn nature prevails. In these situations, I take the view that I have no plan B. I only ever had a plan A, and I work towards a solution.”

Letting the work speak for itself

When discussing her career advancement in a sector – photography – that has traditionally been male dominated, Krystle says that first and foremost it’s the quality of work that should set you apart.

“I do feel that the industry is shifting with more and more females, especially entering the adventure photography realm,” Krystle says. “And I think that’s because of the increasing number of female role models showing what’s possible.”

“That said, I have never wanted to use the fact I am one of only a few women to further my career. Instead, I want to say, ‘I produce great work, pick me’. Equally, rather than being seen as a female role model, I want to be seen just a role model – irrespective of my gender.”

“I try to encourage other women to produce great work that stands out and pass on the incredible support I have received.”

When asked about the projects Krystle has on the horizon, she says, “it’s hard to tame ideas” and is working on one of her many dream projects over the next 12 months.

Given that finding a unique viewpoint sits at the heart of the work she creates and being in the enviable position of turning the things she loves into her work, Krystle will continue to be a role model for those pursing adventure photography and filmmaking.