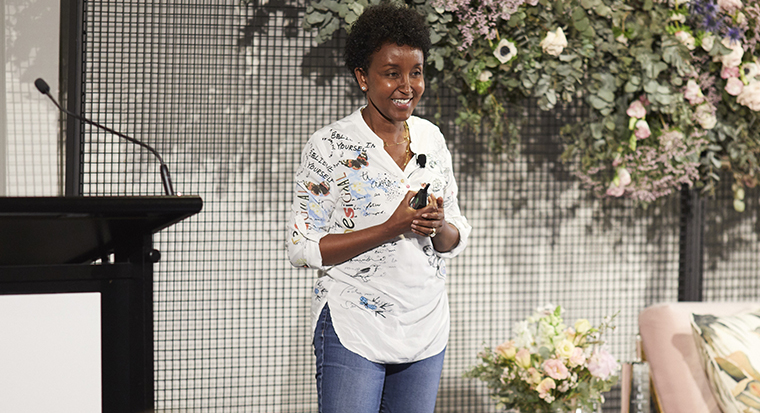 Two women share how they have navigated through unexpected challenges and transformed themselves to follow new paths in business.

From unexpected personal challenges to hard-hitting career lows, there are many hurdles on the road to thriving in business. Two women who understand this all too well are Michelle Cox, Executive Director of Bastion Collective, and Jamila Gordon (pictured above), Founder and CEO of Lumachain. Coming together to share their own stories with Women in Focus, it is remarkable to learn how Michelle and Jamila have overcome the challenges that have come their way – transforming themselves to follow new paths both in business and in life.

Finding purpose – and losing it all

Growing up in Somalia in a small village, Jamila never could have imagined that her future would lead her to Australia and a remarkable career in tech. “Where I grew up, there was no electricity or running water,” Jamila recalls. “It was a very welcoming culture, but at the same time, a very harsh environment.” After moving to a bigger city with her family as a young girl, Jamila found herself inspired by one thing in particular: education. “I had a purpose – I knew how to write and read, I was good with numbers,” she recalls. Outside of school, she helped her father run a small shop – challenging the gender norms that she saw in Mogadishu culture. “They had processes and systems for the way women had to behave… and I didn’t fit into that,” she smiles. “My dad didn’t care! I loved every bit of it.”

But as Jamila shares with us, civil war in Somalia was to change her life dramatically. For her protection, her father sent her to live with distant family members in Kenya, and she ultimately found herself homeless and alone. “I didn’t even think my family were alive,” she recalls. “I cried and I remember thinking, ‘Just a few months ago, I was home, I had a purpose, I had a community. Here, no one knows me. I have nothing.’”

Coping with loss and rejection

Today, Michelle is Executive Director of a successful marketing agency and startup incubator but like Jamila, she has overcome significant challenges to get to this point. The map of her life includes surviving cervical cancer and significant personal loss (her father and her mother, who was just 47 years old when she died of breast cancer) – not to mention the professional challenges that have come her way.

Being made redundant from her role as Managing Director of a large travel company was a particularly hard experience for Michelle. “It was a global company and they were consolidating most of the roles back to London,” Michelle shares. “I knew that was going to happen, but never in my dreams did I imagine that they’d take my role out first,” she says. “It was devastating.”

Taking the leap (for better or for worse)

Contrary to the positive outcome we’re often assured will follow, taking a career leap doesn’t always end happily – but in Michelle’s experience, this can lead to valuable learnings. Following her redundancy, she was head-hunted for a promising new role based in Geneva, fulfilling a long-held desire to live and work in Europe. “It was the ultimate job: I was second-in-charge of a billion-dollar business with 1,800 staff,” she shares. “But the moment I arrived, I knew it was the wrong decision… the company’s values were not aligned with mine,” Michelle says. “I stuck it out because I thought perhaps I was in culture shock, but after three months I couldn’t do it anymore, so I negotiated my way out of there.”

The decision to leave didn’t come easily – in fact, Michelle struggled with a great sense of failure. But she has since resolved to view her experience in a more positive light. “Instead of chastising myself, I recognised that if I hadn’t taken that leap, I would have always wondered,” she says. “I now know that it wasn’t right for me, and that’s ok. It was a great lesson to learn.”

On the other side of the world, Jamila took her own big leap when she came to Australia after being a refugee in Kenya – a remarkable feat in itself owing to her own tenacity, supporters in Kenya and a lucky contact. Arriving here, she sought to learn English and eventually enrolled in TAFE, then at La Trobe University (she graduated with a bachelor in IT, majoring in software programming). Once again, access to education had played a huge role in her journey. “I fell in love with tech and it completely changed my life,” she says.

Jamila’s subsequent career path led her to technology executive positions with some of the world’s largest corporate businesses in Australia and overseas. Incredibly, it also led her to find her family, who had sought asylum in England as refugees. “It was an absolute miracle,” she says.

Hearing Jamila and Michelle’s stories, it’s clear that changing course has been a recurring theme for both of them in business and in life. In Michelle’s case, that short-lived stint working overseas led her to pursue something infinitely more fulfilling. “When I thought about the things I’d like to do, I thought of a small company in Melbourne doing amazing work, called Bastion Collective,” Michelle shares. “I’d always been so impressed with how the founder, Fergus Watts, worked with clients, so I took a punt, sent him an email and asked him if he’d ever thought about expanding his company.”

To Michelle’s surprise, Fergus came back to her straight away. “Now it’s been six years since I came back to Australia to start Bastion in Sydney,” she says. “Our business [a group of marketing and communications agencies] is growing at a huge rate of knots – and they’re the most amazing people I’ve ever worked with in my life.”

After forging a successful career as a senior executive and then a CIO of large businesses both in Australia and overseas, Jamila has also found herself taking on a new challenge. “I had already helped two startups IPO, and my friends, colleagues and investors all encouraged me to create my own,” she shares. Earlier this year, she took another leap and started Lumachain, a supply chain system that uses blockchain to shed light on the supply chain by tracking products from their conception all the way to retailers, helping to create trust, transparency and safety. It’s a far cry from Jamila’s former days of managing hundred million-dollar budgets and hundreds of employees, but the entrepreneur is thriving. “If you’re not challenging yourself, you’re not growing,” she says.

Through all of their ups and downs, both Jamila and Michelle have come to master some key strategies for dealing with adversity.

Michelle has learnt that it serves her better not to fixate on negative events and to keep moving forward. “I’ve learnt not to attach stories to negative experiences – and to pick myself up when I do that and pivot, change direction.”

In Jamila’s case, it is the three pieces of advice her father gave her back in Somalia that continue to guide her to this day:

Building capability in women through education

Things you should know: This information is intended to provide general information of an educational nature only. As this information has been prepared without considering your objectives, financial situation or needs, you should, before acting on this information, consider its appropriateness to your circumstances. Any opinions, views of contributors, conclusions or recommendations are reasonably held or made, based on the information available of compilation, but no representation or warranty, either expressed or implied, is made or provided as to the accuracy, reliability or completeness of any statement made in this information. Bastion Collective is a business registered by THE TALENT COLLECTION PTY LTD and Lumachain is a trademark registered by LUMACHAIN PTY LTD both registered in Australia. If you have a complaint in respect of this information, the Commonwealth Bank’s dispute resolution service can be accessed on 13 22 21. Commonwealth Bank of Australia ABN 48 123 123 124 AFSL and Australian credit licence 234945.