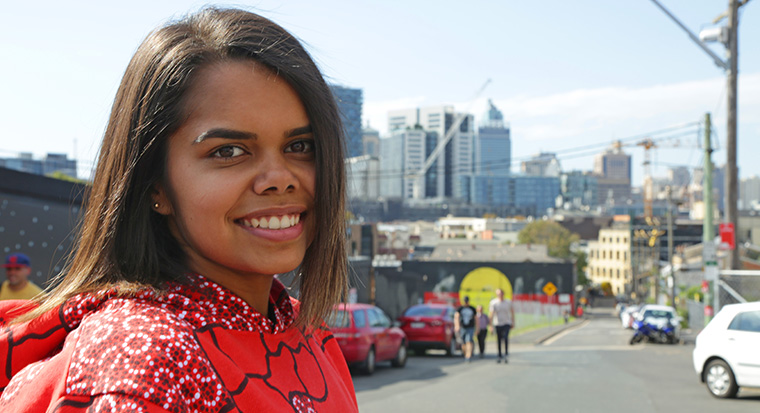 In 2018, the Women in Focus Giving Community supported AIME Mentoring. Here, the organisation’s 2018 Co-CEO, Bianca Hunt, shares with us about her leadership journey and the important work the organisation is doing in the education space.

Educational inequality is a reality faced by many young Indigenous people in Australia, including young Aboriginal women – but 22-year-old Kamilaroi, Barkindji, Ballardong and Wadjuk woman Bianca Hunt is determined to end it.

The 2018 Co-CEO of AIME Mentoring has spent the past year championing for change, making her mark as a leader of an organisation that builds a bridge between university and high school for disadvantaged youth. Here, she shares about her own journey overcoming adversity, and the power of education.

The latest ABS data shows the year 12 attainment rate for Indigenous school students is just 65.3 per cent nationally, compared to their non-Indigenous peers at 89.1 per cent[1]. It’s a cycle of disadvantage Bianca knows can be hard to break. “Growing up in Brisbane QLD, I received a lot of negativity when it came to sharing my vision to attend university by my peers and some people at school,” she shares. Fortunately for Bianca, her parents were her biggest supporters. “My dad was the first person in his family to go to university, and this was the stepping stone that our family needed,” she says. “They’ve always been people I’ve looked up to and they allowed me to be who I wanted to be.”

Bianca was first introduced to AIME through her school where she participated in the mentoring program as a mentee. It was an immersive experience that accelerated her self-development. “My favourite thing about AIME was that they encouraged you to imagine what was possible, instead of telling you what was impossible,” she says. “I was able to take that on in my everyday life, whether it be trying something new, or pushing to be better for my community.”

Bianca went on to pursue a double degree in Business and Creative Industries at Queensland University of Technology. She also became a mentor, empowering more young people to access positive post-graduation pathways.

Since 2016, AIME has invited one young Indigenous leader to shadow the organisation’s CEO and Founder each year as Co-CEO. Bianca applied three times before she was offered the 2018 Co-CEO position – her first executive leadership role. “I’ve always had a goal to work or be in male-dominated spaces and be successful at it,” she says. “I enjoy being challenged and when people say I can’t do something, I do it anyway!”

AIME’s vision in Australia is to end Indigenous educational inequality – and while there’s still a long way to go, Bianca is proud to share that the organisation is making remarkable progress. “High school kids coming through the AIME program are graduating at 94 per cent over the last five years,” she says. “Not only are kids getting through school with AIME, but they are following positive post-graduation pathways, whether that be university, trade or employment, at the same rate as their non-Indigenous peers.”

To achieve these results, AIME delivers its model in two streams both at university and in schools. “On the university campus, we run program days for our mentees – three one-hour sessions where they are mentored by university students,” Bianca explains. The other stream, Tutor Squads, sees university mentors working with students in schools.

For Bianca, the success of AIME comes down to the way in which it fosters self-belief. “AIME is a place where people around you want your dreams to be a reality,” she says.

Reflecting on her journey to becoming the 2018 Co-CEO of AIME, Bianca has never been surer of the power of education for women. “If you educate a woman, you educate a family, a community and can uplift many,” she says. “We already have so much to offer but with an education, we can do so much more.”

The trailblazer wants to see more young people supported by their friends, families, colleagues and communities to dream big, and “get out and make the difference they want to see”. In the meantime, she will continue to set an example for young women to follow in her footsteps. “I want to make an impact for younger women to defy the odds,” she says.