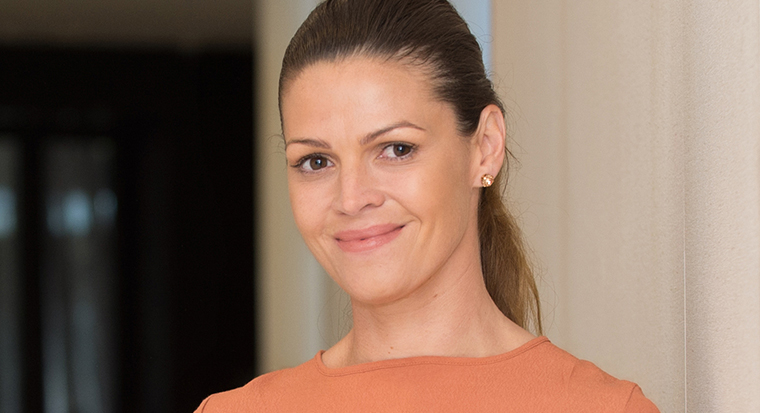 Jarin Baigent founded her business, Jarin Street, with a goal to empower from within. Here, she shares her insights on the impacts of acknowledging and empowering Aboriginal women in Australia.

This year’s NAIDOC Week theme, ‘Because of her, we can!’, celebrates the essential role that Indigenous and Torres Strait Islander women play as active and significant role models at the community, local, state and national levels – women whose achievements have often gone unsung, or unrecognised. One such role model is Jarin Baigent, a Wiradjuri woman whose business venture, Jarin Street, sees her collaborate with Indigenous artists and connect with her culture. For Jarin, this year’s NAIDOC Week theme is a powerful acknowledgement of Aboriginal women, including the many “strong, deadly women” in her own life who have inspired and supported her on her journey.

Because of her, we can!

As Jarin explains, this year’s NAIDOC Week theme is a powerful one that speaks to her own upbringing. “I come from a matriarchal culture and family and the women in my family have been my superheros growing up,” she shares. “They were such staunch, strong resilient fighters and I grew up watching them spend countless hours, days, months and years fighting for the rights of our people.” Jarin’s Nan, Millie Ingram, has set a particularly strong example to Jarin over the course of her life. “She has overcome much adversity and given so much personal sacrifice to help found many important services we use today,” Jarin says. “She has given me unwavering support and faith, and always made sure I was equipped with whatever I needed to succeed,” she says. “It truly is because of her I can.”

Jarin feels that the theme has come at an important time for Indigenous and Torres Strait Islander women. “The valuable contributions women make in community are often overlooked,” Jarin says. “To honour them with the acknowledgement that the women in my family and women across the country so rightly deserve is so necessary and meaningful,” she says. “It makes me very emotional and proud of them all.”

The power of acknowledgment

Jarin Street started with Jarin’s own vision to recognise the misuse of Aboriginal art and acknowledge Indigenous artists. “I really felt the need for some empowerment around our art which is so often exploited in the wrong way,” Jarin explains. “I have so many relatives and friends who are artists and create the most amazing work, and I wanted to find a way to honour their work while respecting them as artists.”

Creating a trusted avenue to showcase Aboriginal art, Jarin now works collaboratively with three Indigenous artists to make ‘accessible, wearable, usable, ethical Aboriginal art’ in the form of yoga matts and, in the near future, active wear and fashion garments. “They have gained the confidence to be artists in their own right and it has also boosted all of our confidence as business owners,” Jarin says. “We all just support one another.” The business also provides an important creative outlet for Jarin. “I think my soul needed something like this to focus on,” she says. “I really feel it has been a way for me to connect with my culture in a different way than I have in the past.”

As an Indigenous woman, Jarin believes that meaningful collaboration has been key to her growing and thriving in business. “We are a very small percentage of the population in Australia and we don’t have a huge presence in the business sector,” Jarin says. “I’ve only been able to get my business from an idea through to action because of collaborative efforts, with government agencies and support from CommBank and the Women in Focus team,” she says.

Attending the Supply Nation Connect conference – an event that brings together Indigenous-led businesses from all industries – has also been a game-changer for the business owner, providing opportunities to connect with likeminded people and generate support. “These opportunities are integral to Aboriginal people in community having the ability to network as well as the confidence to pursue a business opportunity,” Jarin says. “It's all about supporting [Indigenous] business owners through those processes which in most families and communities is unchartered territory.”

So, what will it take to support more Aboriginal women to thrive and succeed in business, on their own terms?  In Jarin’s view, it’s important to highlight the opportunities that exist. “Historically, we haven't had much exposure to running our own businesses, so even just exposure to the idea that we can be business women in many ways is a foreign concept,” she explains. The business owner is also keen to call out a sense of paternalism, which she sees as a significant barrier that Indigenous people face not only in business, but in our community at large. “There’s a mentality in the non-Indigenous community that we can't do it for ourselves and so a lot of people try to 'do it for us',” she explains. “There is a lot of paternalism and it needs to stop for Indigenous people to be strong in our own right.”

For Jarin personally, it has taken a powerful combination of meaningful support and guidance from likeminded people. “I know I thrive when I'm supported and given guidance and constructive criticism,” she says. “I'm very much still working out how to be a business owner and it’s tricky, but I love being my own boss and making my own decisions.”

Things you should know: This information is intended to provide general information of an educational nature only. As this information has been prepared without considering your objectives, financial situation or needs, you should, before acting on this information, consider its appropriateness to your circumstances. Any opinions, views of contributors, conclusions or recommendations are reasonably held or made, based on the information available of compilation, but no representation or warranty, either expressed or implied, is made or provided as to the accuracy, reliability or completeness of any statement made in this information. Jarin Street is a business name registered by Jarin Leigh Baigent registered in Australia. Supply Nation is a trademark registered by Australian Indigenous Minority Supplier Office Limited registered in Australia. If you have a complaint in respect of this information, the Commonwealth Bank’s dispute resolution service can be accessed on 13 22 21. Commonwealth Bank of Australia ABN 48 123 123 124 AFSL and Australian credit licence 234945.