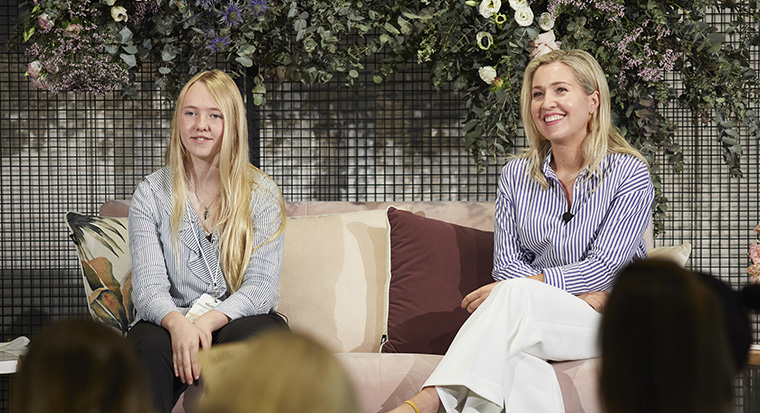 Trailblazers Cecily McGuckin and Holley Somerville Knott are re-defining old ideas of what it takes to lead a business.

“Imagine a business where, for the first 20 years, the owner would regularly say, ‘Women don’t work here, and they never will,’” Cecily McGuckin says. The business Cecily is referring to is Queensland Steel & Sheet and that business owner was her father, a man who had built his company from the ground up and, like many others in his day, felt that women didn’t have a role to play in it. Fast-forward to now, and Cecily is the CEO of the company.

The barriers women in business face don’t only extend to gender – just ask 15-year old environmental activist Holley Somerville Knott. As the teenage CEO of global social enterprise Tell Someone Who Cares, she has had to work harder to prove herself – but she won’t be dissuaded. “I want to smash stereotypes, change the world, and inspire and empower other women to become leaders and entrepreneurs,” she says.

Here, Holley and Cecily delve into their most defining experiences in business, disrupting industries, pushing boundaries, and paving the way for the next generation of female CEOs.

As CEO of a company that sells steel to the Australian manufacturing industry, Cecily stands out as a female leader in a still heavily male-dominated industry. But it took Cecily many years to break through the proverbial glass ceiling. “From a very young age I was shown that the steel industry was not a place for females, and in fact our opinions weren’t required,” she shares.

What followed was a determined effort on Cecily’s part to exceed her father’s expectations – she travelled the world, got a business degree, won her first role in construction development, and finally agreed to join her father, triumphant, at QSS. “I believe women have really strong attributes that we can bring to the table, and that businesses can flourish if they give a woman the chance to lead,” Cecily says. “I’ve let my actions build my reputation [and] my father is now my biggest supporter.”

If Cecily is an unlikely CEO in her industry, then Holley is an unlikely CEO in any – after all, she is 15 years old. But as the confident young entrepreneur explains, she has had a desire to make a difference since she was a small child.  “I’ve always been a social justice and environmental advocate,” Holley says. “When I was 12, I watched a documentary that showed the destruction that occurred as a result of palm oil production,” she says. “I was shocked and devastated, so I started Tell Someone Who Cares, a social enterprise that saves rainforests.”

Disrupting the palm oil industry, Holley’s business promotes a sustainable alternative: a high-quality vegetable fat called rainforest illipe nut butter. “It was funny sometimes because people didn’t know which was weirder – the name of my business or the fact that I was 14,” Holley quips.

But the teenager takes her work seriously and she wants her sceptics to take her seriously, too. “Living up to the CEO title is something I really care about,” Holley says. “As a teen entrepreneur I am younger and less experienced than my competition, so I’ve had to be enthusiastic about learning, competitive, dedicated, resourceful and passionate,” she says. “I don’t want this to be a novelty… I mean business.”

If there’s one thing Holley and Cecily have both experienced first-hand, it’s that sometimes in business you don’t have all the answers – and that’s ok. Case in point: Cecily’s first role in the construction industry. “I had no formal training whatsoever, so I sought counsel as often as I could,” she says. “I asked questions of absolutely everybody, from guys onsite to high-level management.”

When she made the move to join her father at QSS, Cecily made a point of growing her knowledge even more, seeking counsel across all areas of the business to inform her work. Today, she continues to learn from mentors, fellow business leaders, and her staff.

Entering the overwhelmingly adult world of business as a young entrepreneur, Holley also found herself turning to others for business insights and advice. “I spent a lot of time researching online and eventually I was put in touch with a business consultant who helped me register my business name and get an ABN,” she shares. “My mum helped too with her ninja research skills. She taught me how to find experts and ask for advice.”

Like Cecily, Holley has taken what she learned and run with it, winning a host of scholarships and business awards in the process.

When asked about her experience taking the reigns as a new CEO, Cecily recalls the positive impact of collaboration. “Seeing things from my team members’ perspective, and using my self-awareness to understand their emotions, their needs and their wants, has been crucial to my leadership style,” she says. “In the last five years I’ve made significant positive changes to the business but each decision was made using my emotional intelligence, especially when guiding my staff into this new, collaborative way of thinking.”

This isn’t to say that Cecily hasn’t had her leadership skill tested. “Challenges have come from a number of different fronts [including] my father, my staff, my customers and my suppliers, but by listening to my natural gut instincts, I’ve been able to make changes that have shown my worth as a female leader,” she says.

Meanwhile, Holley’s business revolves around a digital platform that is built on the power of the collective – not only sharing information about the Tell Someone Who Cares product range, but also raising awareness about rainforest conservation with a view to unite and connect young people globally.

Collaboration has been just as essential behind the scenes. “A lesson that was really hard to learn is that you can’t always do everything yourself… especially if you’re not an adult,” Holley shares. From sharing the science of soap-making, to finding suitable manufacturers for ingredients, the entrepreneur says working collaboratively with stakeholders has been challenging at times, particularly with her school commitments – but she wouldn’t have it any other way.

Paving the way for women in business

Paving the way for a new generation of women CEOs, Holley and Cecily have strong views about what will be needed from our future leaders.

“The advice I would give is value your abilities as a female, always ask questions (and listen to the answers), value your gut instincts, value your emotional intelligence, and get the right support around you, like Women in Focus,” Cecily says. “I believe these attributes will be even more important in the future, with the increased use of technology and robotics,” she says. “The human touch is at risk of being diminished, and this is when it will be needed even more.”

Holley adds that innovation will also be key. “I think leaders of the future need to motivate their employees to come up with innovative ideas and be creative,” she says. “CEOs should also be Chief Ethics Officers, making ethical decisions as well as strategic ones, and creating a culture of inclusiveness, transparency and compassion.”

Things you should know: This information is intended to provide general information of an educational nature only. As this information has been prepared without considering your objectives, financial situation or needs, you should, before acting on this information, consider its appropriateness to your circumstances. Any opinions, views of contributors, conclusions or recommendations are reasonably held or made, based on the information available of compilation, but no representation or warranty, either expressed or implied, is made or provided as to the accuracy, reliability or completeness of any statement made in this information. Queensland Steel & Sheet is a trademark registered by Queensland Steel & Sheet Pty Ltd registered in Australia. Tell Someone Who Cares is a subsidiary of Stardust Enterprises Pty Ltd, an Australian Private Company registered in Australia. If you have a complaint in respect of this information, the Commonwealth Bank’s dispute resolution service can be accessed on 13 22 21. Commonwealth Bank of Australia ABN 48 123 123 124 AFSL and Australian credit licence 234945.