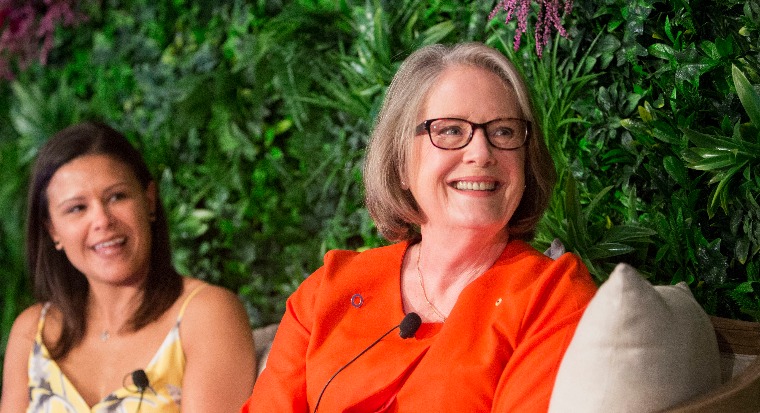 Trailblazers the Hon Judi Moylan AO and Kristal Kinsela share just what it took for them to make their mark, as well as some advice for others following in their footsteps.

Many of us aspire to make our mark in the world, but two women who know what it takes are the Hon Judi Moylan AO, National President and Chair of the Board, Diabetes Australia and Kristal Kinsela, Director of Indigenous Professional Services (IPS).

Speaking at the 2017 CommBank Women in Focus Conference, the pair reflected on how they have spearheaded significant social change in this country, and offered some words of wisdom for others following in their footsteps.

For these women, this is what it takes to be an activist…

1. Have a support network

For Judi, having a strong support network has been instrumental in sustaining her work.

Starting out in real estate, the trailblazer was fortunate enough to have a boss who mentored her – and after enjoying early success running her own business, she was approached by a group of her supporters who wanted to nominate her as President of the Chamber of Commerce.

“So I grasped the nettle and those people did stand behind me. One of them later became the Finance Director of my political campaign, which he continued for 20 years. I would trust him with my life to this day.”

During her time in parliament, Judi found her staff to be an ongoing source of support.

“Politics can be brutal,” she says. “Public criticism and even death threats were not uncommon. But I was fortunate to have the most wonderful staff who sustained me through the rigour of political life.”

2. Draw on your own experience

Working as an adult educator, one of the biggest drivers for Kristal was her personal experience of growing up with, and overcoming, disadvantage.

“We were in housing commission, living in the western suburbs of Sydney and I looked around and I saw that disadvantage,” Kristal says.

“I said to myself, ‘I want better and I don’t want to struggle the way that my mum has’ and I took those experiences as motivation to drive me,” she says.

“I’ve had that lived experience where I was able to change my life through education and having some really good people around me, so it was only natural that I would work in Indigenous affairs.”

On the other side of the country in WA, Judi gained a strong sense of community, which she took with her in her career.

“My parents were wonderful community people, and I was very lucky to have that influence and that sense of contributing to a community,” Judi says.

“Being appointed Shadow Ministry for Small Business in 1994 was a dream for me because I felt strongly about the role of small business in the community,” she says.

“They were being treated like pariahs at the time. My experience though was that farmers and small business people were the first to put their hands in their pockets if the call went out for some help with a social project. They were also the biggest employers of people in this country, so I felt passionately about supporting the sector.”

3. Stick to your values

It goes without saying that crusading for a cause can be challenging – particularly when it involves taking an unpopular stance. But for both Kristal and Judi, certain entrenched values and principles have propelled them to continue their work.

“One of the times that I’ve copped the greatest criticism was 18 months ago, when I made the decision to move back to Sydney from a regional community in Port Macquarie,” Kristal says.

“It was one of the toughest decisions that I’d ever made… but it was necessary in order for me to continue to do the work that I want to do through my business.”

Similarly, Judi has often had to remind herself of her core beliefs in order to muster motivation.

“When you believe in people, it sustains you, even when you’re copping it left, right and centre,” Judi says.

“The first principle of any policy making ought to be the preservation of the life and dignity of people… and if you believe in that, everything else follows,” she says. “Sometimes, in politics you may have to calibrate your thinking, but if those principles underpin what you do, it makes it easier to hold your course.”

For Kristal, entrepreneurial thinking has been key to her building her own business, and creating new opportunities and outcomes for other Indigenous businesses.

“Although I still passionately believe in education as a way to change people’s lives, I [now] see economic development as being the way forward for Indigenous people,” Kristal says.

“For years, governments have thrown money at Indigenous strategies and initiatives, not necessarily working with Indigenous people around solutions,” she says.

Having grown a million dollar business herself, the 2017 NSW Aboriginal Woman of the Year believes that both Indigenous and non-Indigenous children should be shown that they have the potential to do the same.

“I’d like to see enterprising skills and thinking entrepreneurially taught within the school system,” Kristal says.

“We’re never told that you can actually run or own a business, and I think we need to start to plant that seed really early on,” she says.

How to position yourself for promotion

Things you should know: This information is intended to provide general information of an educational nature only. As this information has been prepared without considering your objectives, financial situation or needs, you should, before acting on this information, consider its appropriateness to your circumstances. Any opinions, views of contributors, conclusions or recommendations are reasonably held or made, based on the information available of compilation, but no representation or warranty, either expressed or implied, is made or provided as to the accuracy, reliability or completeness of any statement made in this information. Diabetes Australia is a trademark registered by Diabetes Australia in Australia. IPS is a majority Indigenous-owned organisation in Australia providing professional services to a range of industries and to government to meet structural, performance, financial, safety and organisational needs, while achieving supply chain diversity. If you have a complaint in respect of this information, the Commonwealth Bank’s dispute resolution service can be accessed on 13 22 21. Commonwealth Bank of Australia ABN 48 123 123 124 AFSL and Australian credit licence 234945.